Since I reviewed Spy Alley yesterday, I will write another game review today. This is a new thing for me. If you’re looking for posts about programming issues or the Linkage program, you’ll have to skip over these reviews.

Tokaido is a beautiful looking game. It has an elegant artistic design that appeals to the eyes as much as it appeals to the soul. It also has rules that are unique for all of the board games that I’ve played; you can move [almost] as far ahead on the board as you want during your turn!

Tokaido Game Board and Stuff

The rules of the game in a PDF file can be found here.

The important rules of the game are: The player furthest back on the road is the one that takes a turn. A player may move ahead to any unoccupied space on the board (up to and including the next Inn).

When you land on a spot on the board, you take some action based on the type of the spot. At the Temple, make a donation; at the Village, buy some goods; etc. You then get points for the various actions.

What makes the rules interesting is that if some players move ahead more than one spot, in order to get to something advantageous, the layer who is furthest back could move twice or more before they are no longer the furthest back.

As usual (for the entire two reviews I’ve written including this one), I will not go into the rules and gameplay too deeply. Read the rules and/or watch a YouTube video if you want to see finer details than I’m providing. 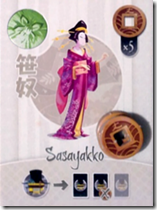 Before starting, players pick a Traveler that gives them some advantage in the game. This might be the ability to chose from more cards when buying at a Village, or the ability to donate a coin from the bank to a Temple instead of using your own coin. There are 10 Travelers and a player gets to pick from a random set of three that they pick from the deck.

Players take turns moving ahead to a spot of their choice up to and including the next Inn. Inn’s are special spots where all of the players must stop before they can all start moving again.

Picking spots is fairly easy; pick the next spot that you can. Unless your Traveler gets a big advantage from moving ahead of few more spots, doing so will just let other players take more turns until you are furthest back on the road and again get to take your next turn. You could move ahead 5 spots in a two-player game, but that would then let the other player take up to 4 turns before you get to move again.

At the various spots on the board, make decisions wisely. You will need to save some money for buying food at the Inn (or lose a lot of points), so how much gets spent on donations, goods, donations, etc., is important. In fact, there are only really the two decisions to make in the game; where to move next, and how much to spend on a spending spot.

Tally up the points as you go, but recount them after adding in bonus points awarded after all players have reached the end of the game.

My Impression of the Game 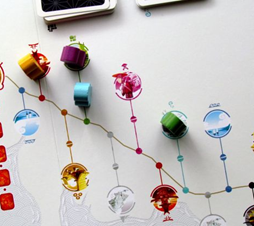 I have only played this with four players once. I played with three players twice. All of the other sessions were with just me and my daughter.

The game seems to keep any one player from getting too far ahead in points. If Dave skips a few spots to get to an advantageous location, Bailey ends up taking more than one turn, thus making up for Dave’s advantage. If you have a good strategy, the game is usually over before you get a big point gain from it. But if you are lazy and don’t try hard, you sure won’t win by accident.

Usually, my daughter wins at the games we play. The last time we played Tokaido, I kept focused and made serious attempts at taking advantage of my Traveler abilities. She had an early lead but a few very specific moves on my part kept her from scoring and let me get ahead after the first Inn. In the end, my middle-game advantage got smaller as she was able to take some extra turns to make up for it. I still got the win but I had to certainly work for it.

The game is not suspenseful or stressful. It is almost relaxing compared to other games that we play. A player need only think about the next spot for their move. Do you move ahead a little further to take advantage of your Traveler abilities, or play it safe? Do you move to s a spot that your opponent wants or let them have some points while you play it safe? Most of the suspense comes from all players playing well and having similar scores until the end.

This was a hard review to write. I love look and feel of the game more than the actual game. Never-the-less, it is a fun game and I recommend it. It is a relaxing game that is better than most at letting you decide at your destiny. Compare it to the game of Life, one of the worst games I’ve ever played, and you realize that Tokaido is not at all a set of random steps you take while waiting to see how it works out in the end. Tokaido lets you have almost complete control over your destiny. 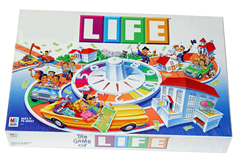 The Worst Game I’ve Ever Played

There is an add-on pack for the game that I have not played. Others recommend it, so it may be worth getting. I don’t see it on amazon.com so I won’t be able to get is anytime soon.

Get Tokaido if you appreciate the art of it. It is a beautifully designed game.