My daughter and I have been trying a variety of board games recently in a quest to find the absolute best game EVER! I decided that I should review some of these games here on my seldom-seen blog. As always, I write blog posts as a sort of exhibitionist diary, more than as a way to communicate with millions of readers. 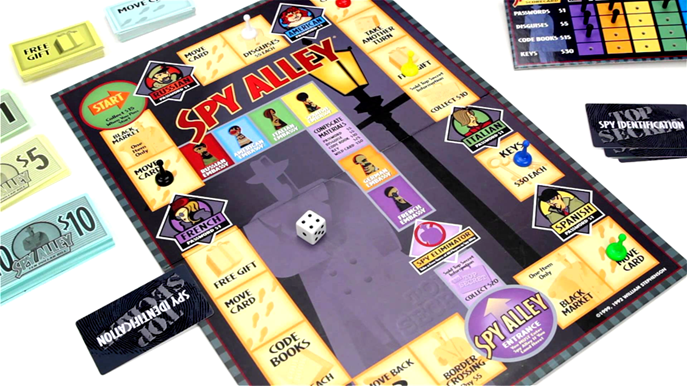 The full game rules in a PDF file are here.

My short summary of the rules is this: Start with an identity card that tells you who you are. Move around the board and buy spy gear. Since the other players can make you lose by guessing your identity correctly, you must buy gear that you don’t need to make them guess wrong. If you are the last player in the game, you win. If you get to your country embassy in spy alley with all 4 spy gear items for your country, you win.

Each player starts out with a random identity (or two) and a large card to hold all of your spy gear items. You don’t actually get items, just markers for what you have.

Roll a die and move around the board. Buy items that you need as well as items that you don’t need. If you think that you can guess the identity of another player, guess right and they are out of the game but guess wrong and you are out.

If you have all four spy gear items for your identity, you can win by getting to your country embassy in Spy Alley. But as soon as you get close, someone else will probably guess who you are.

When you guess at another persons identity and you are correct, you get their identity card and then discard either your original card or their card, without anyone knowing which one you kept. The game is all about deception.

How It Went For Us

When my daughter and I played the first few times, we played by the standard rules where each player randomly picks an identification card. She then proceeded to win each game by guessing who I was. Neither of us ever got to an embassy.

There is more to the game than buying spy gear that you don’t need. How you act when you buy it is just as important. This is more like a game of amateur poker than a board game of buying spy stuff. I say “amateur” poker because professionals usually play using statistics but amateurs tend to bluff or give away that they have a good hand by showing too much emotion. I tend to talk differently while buying gear that I need vs. gear that I don’t need.

After the first few games, we started playing a two-player variation where each player has two identification cards. This is much better when there are only two players. It gives each player at least one “free” guess about the opponents identity since guessing wrong won’t lose the game for you immediately. It also means that 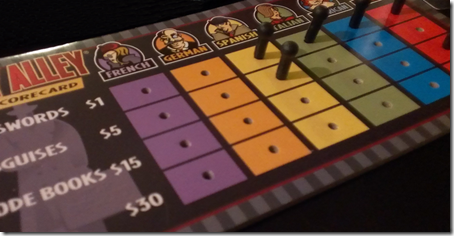 We play the two-person game and have two identities each. We both take turns moving around the board buying spy gear. I tend to get all of the stuff for one of my identities while also trying to get most of the stuff for at least two identities that are not mine. I ignore a few completely. My daughter tends to work more horizontally getting the cheaper items for just about every spy.

After a while of this, she decides to guess at one of my identities. She gets it right and I have to give her that ID card. She then has three cards and must discard one of them. But wait; she might keep my old identity and discard one of her original identities. I play as if she discarded the card I gave her because it starts getting hard at this point.

We go around the board for a while and I have all of the stuff I need for one of my identities. As soon as I do, she guesses it and I lose.

Yes, that’s how it goes. Sometimes I can guess one of hers and we are both left with one identification card. Then, the game gets tough because neither of us can guess wrong without losing. I did win once or twice, but not the other five or six times we played.

In the one game where our family of three played, my daughter was again the winner. You see, there is a wild card that can be used for any spy gear that you might need. While my wife and I were trying to figure out what to do, Our daughter got to her embassy in spy alley without us realizing that she had all of the items she needed.

At some point in a two-person two-identity game, a player could guess the other players identity using their own identity! This would lose them their other identity card but would also make the other player NEVER guess who they were. After all, who in their right mind would give up a card like that?

After playing the game six or seven times, I never developed a good strategy beyond controlling the way I talk to myself when buying gear. This is a casual game and a little chit-chat is required to make the game fun. Plus, it’s fun to try to be devious and throw off the other player.

Oh, and don’t buy all of the gear for a fake identity unless you are prepared to be discovered the moment you pass up Spy Alley and the embassies. But if you have all of the gear for a real identity and the other player doesn’t feel comfortable guessing, maybe pass Spy Alley the first time so that he next time around the board, you can head for the embassy and they’ll think that you’re bluffing.

It’s a fun game. The rules are fairly simple. Gameplay is like poker because you bluff by buying gear that you don’t need. We have fun playing this game with 2 players.

Oh, and no one ever gets to an embassy.