Download the version that runs (I hope) on Windows XP here. Read the FAQ for more info about the XP version.

Download a 32 bit version just for the hell of it (the latest versions are all 64 bit).

Linkage is a computer aided design software package that is used for quick prototyping of mechanisms. You are on the download page for the Linkage program. If you found this page directly and want to get to the information page about the Linkage program, click here.

Linkage is protected by the WTFPL license. By downloading this software, you agree that you can do whatever the #$%& you want with it, and it has nothing to do with me. If you build a nuclear power plant and blow up a city, that is your problem.

Yes, that is the entire license ;)

The Linkage installation file is signed with a Microsoft Authenticode certificate from Comodo. When the Linkage program is installed, it will not show a warning about an unknown publisher; it will show my name!

Unfortunately, Internet Explorer, and now Windows 8, have an anti-malware feature where any software might appear to be rejected as malware as seen below:

This is a misleading message because it appears for any downloaded file that has not been downloaded enough times to make Microsoft feel that it is safe. Microsoft does not tell developers how many times a program must be downloaded before this message stops appearing. There is no certificate or other type of authentication that we small developers can use to get rid of this message.

Click on the More info text. Another warning shows up. I was going to be sarcastic and say that Microsoft should add one more warning just to make sure the users knows what they are doing. Unfortunately, it is too sad to be funny. Here’s what shows up next:

You can see in the example above that my name appears as the publisher. This is because I had Symantec verify my name. They have a copy of my passport and they know where I live. The signed code is secure so that someone else cannot get it, add a virus, then send it to people. Of course I could have gotten the code signing certificate and then created evil software, but then there would be a way to track me down. Certificates for people who abuse the system can be invalidated, although that appears to be a rare thing.

Click on the Run anyway button. The Linkage installer will run and let you install the Linkage program.

Warnings on Other Versions of Windows

Using Internet Explorer 9 or 10 with earlier versions of Windows is tricky. The first warning for a digitally signed program looks like the one below and shows up in the browser window:

Then after pressing the Run button, this shows up:

After pressing the Action button, Microsoft wants to give you yet another chance to be confused and annoyed. Oddly, I saw one message box that didn’t show up later when I wanted to capture images for this post. Below is a copy of someone else’s image. I cannot explain why this doesn’t show up anymore. In my case, the publisher name shows up properly. The fact that my program is digitally signed might be the reason that I only saw this message once or twice: 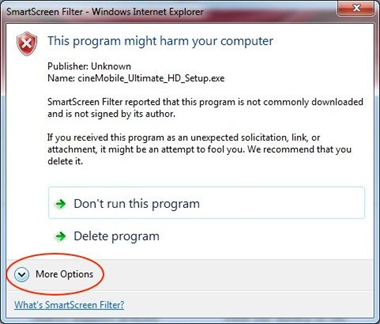 I still get this message (below) too. Microsoft obviously wants to convince users to stop downloading software. I wonder if this is to stop malware distribution or to make more money with their store: 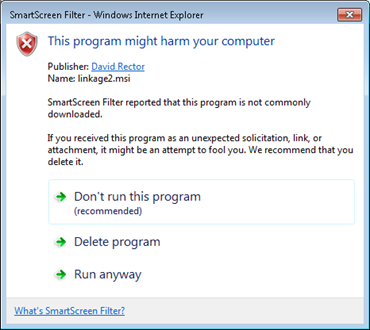