Terraforming Mars is the Best Game Ever 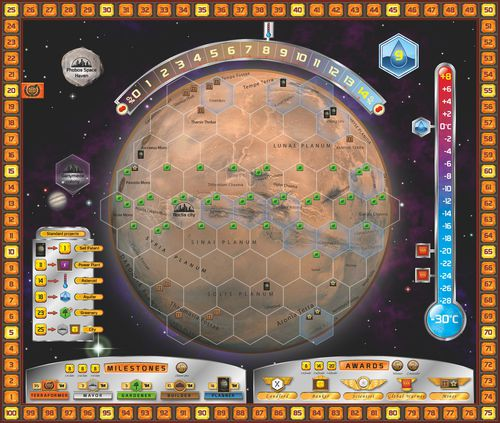 I exaggerate. It’s a great game for me an the group I play with but saying it is more than that presumes I know what every other board game player wants in a game and finds in this one.

I played with three other people last night. Let’s just call them Tim, Wil, and Eric (since those are their names). We play a variation of the game where we each get to pick from three random corporations but we get to pick after we see the first ten cards we can buy. This way, players are less likely to be stuck with a horrible car draw on the first turn. It also seems to make the game very competitive since we all start out with a little bit of scoring power.

I picked Phoblog as my corporation. My first ten cards had more than a few space cards and they are usually expensive. Having the 40 credits worth of titanium really helped with that. At least two of my starting cards also increased titanium production.

As the game went on, I was able to play a card they let me place oceans for a discount and using titanium to pay for them. That worked well to keep me in the running on the TR track. But I also ended up drawing some plant production increase cards that were surprisingly easy to use. Once my titanium production got up to 4, I placed a few oceans giving me some plants. Playing the plant production cards fairly early, one of which required 5 oceans, gave me a lot of plant production and plants by the end of the game. It was a weird combination of space cards and plant cards I was getting and playing. but since I kept getting these cards and not getting building cards or energy cards in my draws, it worked out well.

We played on and I kept focused on just keeping up. Tim was playing “quietly” in that he didn’t make too many obvious strong moves. Eric was playing a seriously large number of green cards. Wil, playing better than he did in the past (he did win one game last week but always lost before that), was playing to keep ahead on TR and even claimed the TR milestone. The only real player interaction happened late in the game with tile placement and a few sabotage actions (costing me 2 points in the end due to lacking 4 plants I once had). Well, there’s always the player interaction for claiming milestones and awards that is ongoing throughout the game.

My strategy is to always look for cheap ways to get points, like titanium production to pay for a space card that is worth 2 or 3 points. The only negative I ever got in the game was –1 credit production to take out a loan on the last generation in order to build a city touching a bunch of greenery tiles while still having credits left to get one more 1 point card. Money is not useful during end-game scoring unless there is a tie so production loss of 1 is meaningless and the ten new credits is usually useful for paying to get one or two more points.

I won by two points. The point spread was about 6 points. I don’t recall who was just below me except that I know that Wil came in last. his push for TR was great but he didn’t have much in the way of tiles or card points.

I attribute the win to me working hard at getting the last few points I could from tiles and to my strategy in every game to get card points. I was not the best in the  game at getting TR or at claiming milestones or awards (I got only one milestone and no awards) but then those are tricky to get and sometimes cost as many points as they can gain.

There’s also the luck-of-the-draw where a game can go very badly if every draw yields totally useless cards. Yes, there are times when a card is just totally useless, like when it’s a card that requires a high temperature and the temperature is super low. It’s just not worth it paying to keep a card in hand for 10 generations just to end up not being able to use it effectively once it is usable. fortunately, we have each only experienced a really bad game once. Maybe twice. When I won by 40 points once in a one-on-one game, I just figured it was a bad card day for my opponent. I didn’t really do much special in that game except for not screwing up or getting lazy due to the constant lead I held.

It is the most replayable game our group plays. I think that it is a good fit with our group because we all play as well as each other and the game offers a slightly different experience each time we play. It doesn’t feel repetitive due to the large number of cards that come up differently in each game and because we each keep experimenting and picking corporations we have not yet played or have played very few times. We also have the expansion maps which help a lot with the repetitive nature of games. 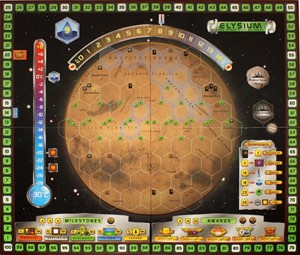 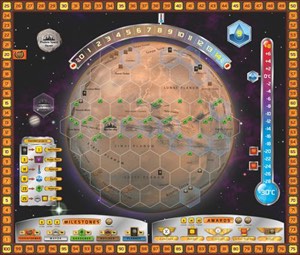 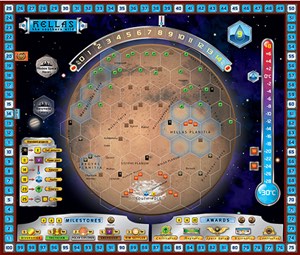 There are lots of more highly rated games but this one is good for us. It’s good for me.