I have a little bit of the user interface working. 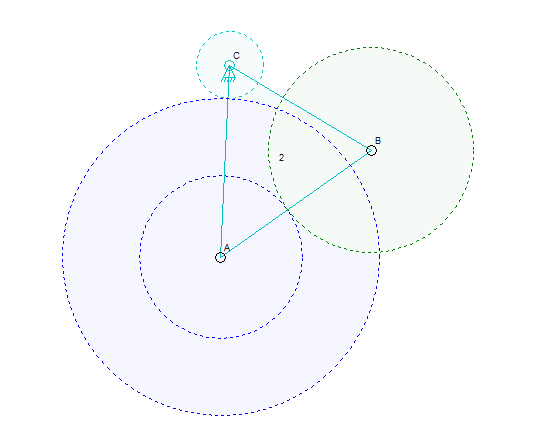 In the image up above, I added an anchor with a link, and then made the link a gear. That’s connector C and the link went to connector A. Then I added a lone connector and made it a gear that I then dragged on top of A, automatically joining them. That gear link at A that is blue is it’s own link, but the number isn’t shown yet because that link has only the one connector. Anyhow, I set a ration between C and A and that’s why there is a small green dotted line circle at C and a larger blue dotted line circle at A. Then I added another connector and combined it with link 2, which was between C and A. Tat gave me the connector B. Finally, I added alone connector and made it a gear, and joined it to link 2 at connector B. That’s why there is the off-green circle at B. Sine I gave a ratio for the A to B gear connection, I get two blue circles, one for meshing with C and one for meshing with B.

I’ll post more later when I have these things working better.

So far, only the user interface is working a little bit. I have not tried to simulation any of this. That should be very easy, since it involved a simple link rotation for any one gear. Of course, I’ll have to detect when gears conflict with each other, but that too should be easy. It’s really just a lot of typing and testing to make sure that I didn’t miss anything.