In 1991, I wrote DiskPie. It is a program that scans a disk drive and displays directory sizes in a pie chart. 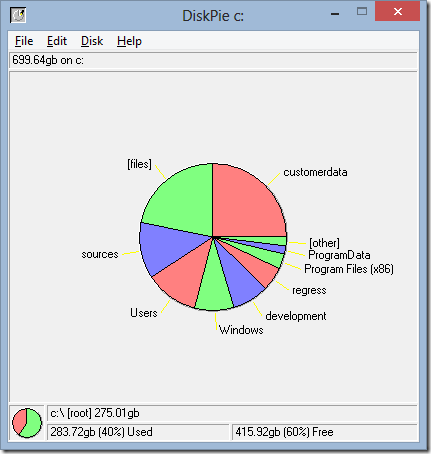 DiskPie was written for Windows 3.1. It does not use MFC or C++ or any modern technology.

As you can see in the image above, the visual style is dated. The border and title only look new and modern because Windows 8 draws them. The rest is all mine.

The interesting thing about DiskPie is that I updated it once about ten years ago to use 64 bit numbers for all file size information. Before that, it could not handle a disk drive that was bigger than 4GB. Yes, 4GB! After that change, it has worked fine with all versions of MS Windows up to version 8 today.

I just ran it to produce that image. It was very quick. In fact, it seemed like it ran much quicker than the very slick looking Disk Falcon shown below: 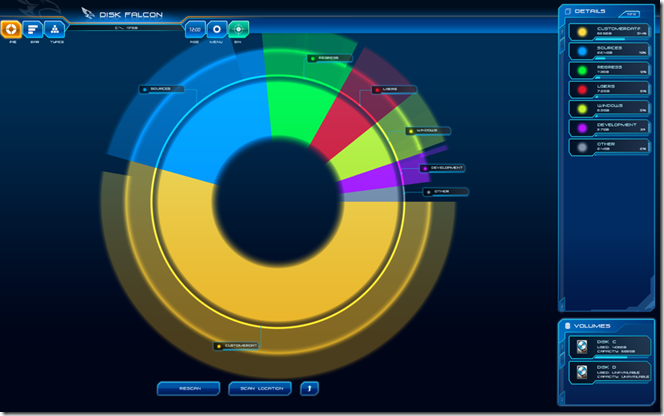 Disk Falcon ran for a while until I got tired of waiting. It did update the pie chart as it went – something that DiskPie does not do – and the visuals are very nice. The user interface seemed a little sluggish and maybe it requires a graphics card that is less than two years old.

Obviously, the Disk Falcon screen is much more interesting and visually stimulating. 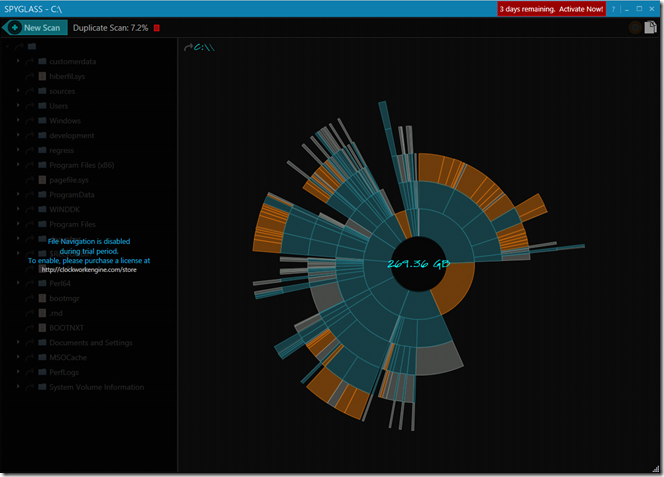 Spyglass is great. I had to edit this post after I discovered it. It is not a Windows 8 Store app but it has a simple flat style that I like. There was a big hang when I first clicked on a subdirectory but now it’s working fine. The display shows subdirectories nested visually so that the entire disk space usage can be seen. I did not pay for it so I don’t know how well the tree navigation works.

The image above shows a disk drive that has quite a lot of data on it.

I don’t like the default script style font. I would prefer the sans serif font that Windows uses for most Metro style apps.

DiskPie cannot show files in the chart; a directory that has only files and no subdirectories is shown like this: 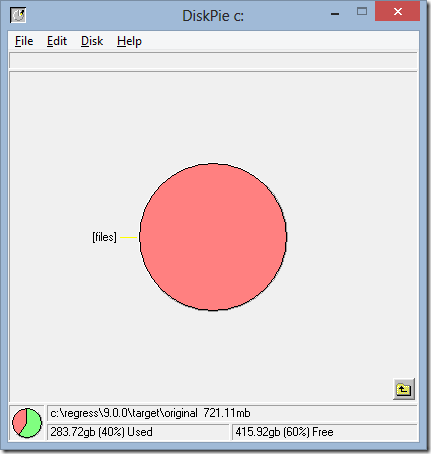 No File Display in DiskPie

Other than the one shortcoming of not being able to display files in the chart, and only being useful to show the chart and do nothing else, DiskPie is a nice little program. It is weak by today’s standards but it still works exactly as it was intended to work.