I’ve been using Windows 8 for a few weeks now as the main operating system on three computers. I also have Windows 7, XP, Linux, and OSX iMac, computers. I’ve gotten past the initial hatred of Windows 8 and I think that I can do a reasonable and fair job reviewing it. This post is a quick review of the things that stand out the most to me personally.

Windows 8 has the Start Screen and built-in Metro Modern UI1 apps that are all designed for a touch screen laptop or tablet. There is little to say about this feature other than the two things that seem to be the most frustrating on a desktop system:

The tiles and buttons are too far apart when using a mouse. When I right click on a tile on the Start Screen, all of the action buttons are displayed along a bar on the bottom of the screen. It gets a bit tiring having to look that far and then move the mouse that far.

The mouse cannot be used like a finger. I should be able to hold down the mouse button and move the mouse exactly the same as pressing and moving my finger on the screen. But no, I need to go hunting for hard to see scroll bars.

The Windows 8 Start Screen is not so bad other than the large size of the tiles. I like the look and feel other than needing large mouse movements to get things done.

I never despised the Start Screen like many reviewers. Other than the mouse-only issue, which all full screen Metro Modern UI1 apps have, the only other problem is that there is no overall menu of apps to scroll through. That really isn’t true and the clicking the right mouse button on the background area then clicking on the All Apps button at the lower right corner of the screen shows what the entire list of installed apps. It still seems like some of the things that were in that Start Button menu of programs are missing but so far, I have not felt disappointed.

Surface Pro is a desktop PC shrunk down to be a tablet. It can run any program that runs on a Windows desktop machine.

Surface RT is a Windows Phone enlarged to be a tablet. It can only run apps sold through the Windows store and that all use the new Metro Modern UI1 style.

The stylus works fine on the Surface although it sometimes seems like the screen location is a few pixels off from the physical position of the tip. Holding the stylus more perpendicular to the screen helps with this but desktop apps are still small enough to make actions difficult. The stylus is mandatory for desktop apps since the screen is so small.

Since I am a programmer, I’ll write a bit amount my development experience with Windows 8 and the Surface Pro. I have not tried a Surface RT so I can’t comment on it specifically.

The image above shows the emulator. It’s not a Surface emulator and can handle screen sizes up to 2560×1440. The screen is always shown at the correct width to height ratio but can be resized. The screen contents are scaled appropriately. The image above shows an unfinished Windows 8 prototype that I am experimenting with. I am trying to develop an interesting and good looking interface for an app that doesn’t have a lot of pretty content. Behind the emulator is the Visual Studio program.

The same app running directly on the desktop flows differently and there are five rows of tiles instead of 4. 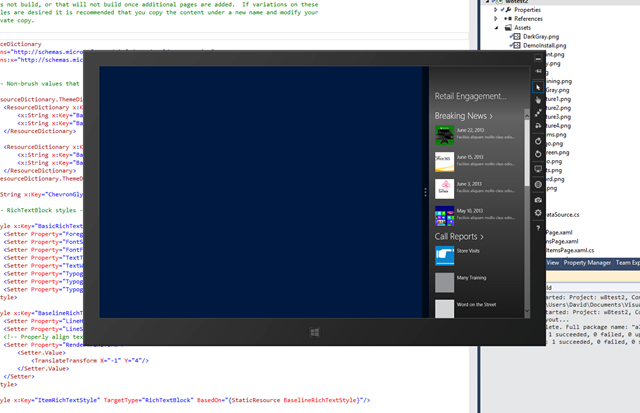 One very nice feature of the app framework that Microsoft Visual Studio provides when creating a basic tile app is that it has built-in support for snapping the app to the side of the screen. This is an interesting feature that is unique to Windows 8 devices. Notice how things are displayed differently when the app is snapped to the side of the screen in the image above.

Windows 8 comes with a virtual machine feature previously available in the server versions of the operating system. First,I must say that there is no reason to have this feature on a desktop machine supporting a single user like my mom or dad. It is useless to most people.

Second, it makes online FPS games run at about half their normal frame rate. It is hard to know why. Microsoft and many people online say that it is “fine” or that something else is wrong since they don’t have a problem. The fact that disabling the virtual machine technology and seeing normal gameplay tells me that Microsoft just screwed up and doesn’t want to fix it. Either that or they are just embarrassed or arrogant and don’t want to admit that the Hyper-V feature must be disabled to have a computer run at top speed.

Finally, It appears to provide an easy path to running the phone and surface emulators. I appreciate this part of the feature although it is hard to use a computer for both high performance gameplay and for development of phone and Surface apps.

In summary, Windows 8 is not really that big of a change for me. The absolute hatred of this new interface seems unjustified although Microsoft really messed up when they ignored reviewers that said they wanted to boot to the desktop. The Start Screen on the desktop is a bit silly due to the annoyance of having to use it with a mouse. 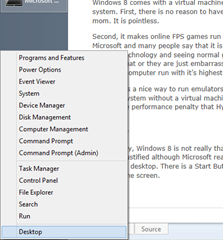 There is a Start Menu

There is even a Start Button menu that can be accessed by right clicking in the lower left corner of the screen. I don’t use it.

1. Microsoft abandoned the “Metro” term. They don’t have a good replacement name for marketing the new style and it is sometimes called the Windows 8 style or the Modern UI style. Even though they were sued by some European company about using that name and they settled on removing from all documentation and marketing materials at MS, it seems like third party developers could still use the term. I though that the name was very appropriate and I was sad to see it go.