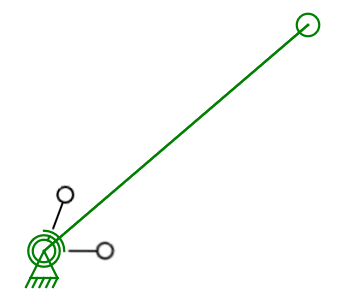 The rotating input connector can have an oscillation limit angle that makes the rotating input reverse when the angle is reached. There is also an angle that is just the oscillation offset or start point. It’s hard to describe that start angle although I should just call it the start angle. if there is a non-zero start angle then the starting position of the input is considered to be at that angle when it starts at the beginning of the simulation. These two numbers form a bounds around the movement.

The rotating input with an oscillation angle of 20 degrees and a limit of 90 degrees looks like the rotating input in the image above. There is an extra arc drawn that shows the limit and the little line that shows the rotation during simulation, normally at the top dead center of the connector circles, is offset by the start angle. When this is running, that little line will rotate as the input rotates and when it reached the end of that outside arc, the direction of rotation will reverse. When it reached the other end of the arc, rotation will reverse again.

I’m not happy with the non-mouse way of entering this information. A circle has a radius that can be set using a small control knob as seen below.

There are also control knobs that show up on actuators and on splines at the node points. It seems like I should have a way to set the oscillation limits using control knobs. Maybe knobs like this shown in teh image below would do the trick:

I’m going to try to get this working. The control knob code is a bit tricky, especially since there are two for this element, but improvements made for the spline editor should help with this. In fact, it might not be nearly as tricky as I think. The only trick will be to deal with them overlapping but maybe being able to pull them out farther away from the input connector will solve that problem.

The next thing I’ll need to do is show some status info about the control knob either in the status bar or next to the knob so the numbers are visible for people who like numbers.