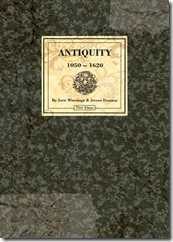 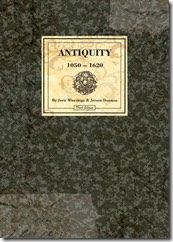 Antiquity is a game by Splotter, a Dutch board game publisher. The game has a bit more depth and breadth than most board games I’ve played. I’ll compare it to some other games in later paragraphs. First, I want to describe the first game of it that I played 1-on-1 with Tim. 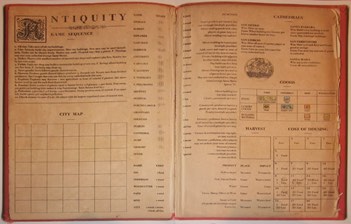 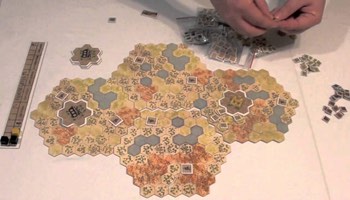 I set up the board and player areas and we were ready to go fairly quickly. All of the buildings and resources were left in small bags to start with. We did not bother with privacy screens and did all of our city-building and building-manning out in the open. That’s the best way to play this the first time. Maybe it’s the best way to play the first three times; we’ll see. I spend all of my starting wood and build six storage units, a cart shop, a harbor, an explorer building, and four houses. Maybe there was one other building but I think that was it. Wow was that all a huge mistake. that I will explain in a moment. We always play our first games by just going for it and undoing terrible mistakes so it was fine to make it. And reading the rules and trying to “get” it the first time just never works as well as having a giant failure on the very first round. So I used an explorer and found fish and went ahead and built a fishery in the countryside. Rule note: Both hexes of the fishery need to be adjacent to a water hex. It can be the same water hex but both need to be next to a water hex (which I did correctly and by accident I think). We finished the round and then I realized my mistake: I used up all of my wood building my city. Without wood to create a woodcutter, there is no way to get more wood. And without more wood, there is no way to get much of anything, including more wood. I traded in a building for a wood resource and we played on. Later, we discovered that my wood mistake kept me behind by a round or two (I didn’t actually trade for a wood until sometime in round 2, not in round 1).

After fixing my wood situation, I was able to play okay and we were fairly competitive, with me still always behind a little, for six rounds. It was tough figuring out what to do but that’s normal for the first time playing a game. Tim, as always, played well. He seems to have a keen sense of board game play, and picks up new games quicker than I. For about the first six rounds, the painful aspects of the game were not hurting too much and we just worked on getting resources.

Pollution is filling up this board (four player game)

In the later rounds, we got slammed by pollution and my city ended up filled with graves due to famine. Tim was able to build a second city just in time to handle this, using those resources he was collecting since round 1 (remember my wood delay?).  He built a cathedral and picked San Christofori and was able to store resources in his Cathedral. I ended up with graves on my storage and eventually ended up with a city-of-the-dead. We ended the game.

Afterwards, Tim took another turn and we decided that he could, if he played just right, have a real win. The trouble was that it would rely on him being able to build at least three Inns in order to get to an explorer in order to get a resource he needed. But he could have also built a Market and traded with the game. A player can use a manned Market to trade any two resources for any one resource. Doing that, it is likely he would have collected enough resource for the win at about the same time the entire board became polluted.

What did Tim do right to do as well as he did? He used a wood to create a woodcutter in the first round. He then built a Granary which reduces the famine level (for him). he also expanded his zone of control reasonably well to allow him access to more resources once he had the Cathedral to store it (San Christofori allows that).

One of our current favorite games to play 1-on-1 is Terraforming Mars. Terraforming Mars has a main map where players compete for “resources” just like Antiquity. And each player has their own play area where they are “building” their own corporate structure. TfM players do some things in secret at the beginning of a round (buying cards) and then based on their resources, take multiple actions to alter their corporate stuff or to alter the shared game map. It is similar to Antiquity in many ways. Here’s a list of similar game features that are also different between the two games. These are what make Antiquity a deeper game:

It’s clear that the games have a lot of similarity on the surface and are quite different beyond that. When I started writing the comparison, I wasn’t even sure the games were at all alike. Clearly, they are two games that can be compared to each other quite easily. 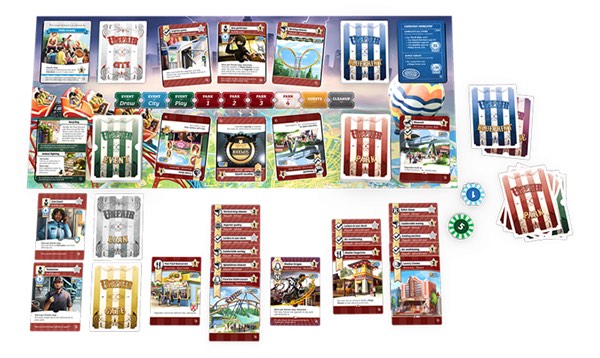 Unfair Game Board and Player Area (one of the players)

A second comparison will show that TfM was a good choice for the first comparison. Unfair is a game where players “build” a theme park using cards. The games are only similar in that there are phases of play and there is a player area that is a sort of “map” of the theme park. Here’s the list of things that seem similar between the games that might be useful for comparison:

Unfair and Antiquity have similarities but since most games have rounds, turns, phases, etc., they are rather meaningless for comparison. Antiquity is a deep complex game compared to Unfair, and even compared to Terraforming mars. 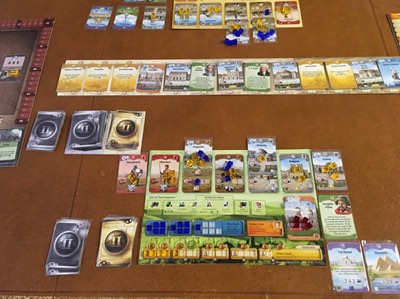 I’m going to try to compare Antiquity to Through the Ages (TtA:ANSoC). Through the Ages is like a combination of Unfair and Terraforming Mars when it comes to comparing these games. TtA is a card-based game with no real game map, like Unfair. It is also a building game like TfM and Antiquity. Here are the things that I think are interesting when comparing it to Antiquity:

Through the Ages: A New Story of Civilization is a deep game. A little deeper and more complex than Terraforming Mars and far more complex than Unfair. And yet is is still not as complex as Antiquity. TtA has one type of food resource and essentially one type of non-food resource for building things. Antiquity has resources that have multiple purposes and it has a lot of them. Wood is used to build a lot of buildings and to create woodcutters but food can be used to build some houses and to build farms. Luxury good can also be used to build houses and a few other more interesting high-level buildings. there is just more of the whole food/resources complexity to manage in Antiquity than in any of the other games (and Unfair has money and no other resource).

I would say that our fist play of Antiquity went rather well. The instructions are only a little unclear here and there due to the quantity of the instructions – the quality is rather high. The mistakes we made were mostly in strategy not knowing what we might need from one turn to the next. And as we played, the game steps, phases, actions, etc., all became very clear and easy to remember. A few times, we almost skipped a phase or two but the player aid reminded us what to do each round. And with each round increasing the famine level and amount of pollution on the board, it became clear that this is like no other game we have ever played.