I just finished building the parts for the ball lifter. This won’t be the last post about this rolling ball sculpture because I need to build the track. But I may not have much to say about the lift mechanism after this.

Another Movie of the Two-Step Ball Lifter

The next step is track building. In the picture below, you can see one of my previous sculptures. I am considering using this type of support style to hold the track. It’s organic and plant-like, and might be very interesting because of the contrast to the machinery that would be inside of it. I’ve never built one of these rolling ball sculptures in an industrial style so I’m a bit resistant to doing that now. 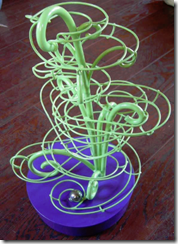 Come back in a few weeks or months to see how progress is going. At a minimum, I will have the very top of the track build within a week or two. 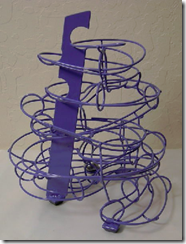 Above is a smaller RBS that I built that has a hint of industrial-ness to it. It’s really the support system that defines the style of an RBS, not the track. Color can make a difference, but apparently, no one else paints their sculptures like I do.