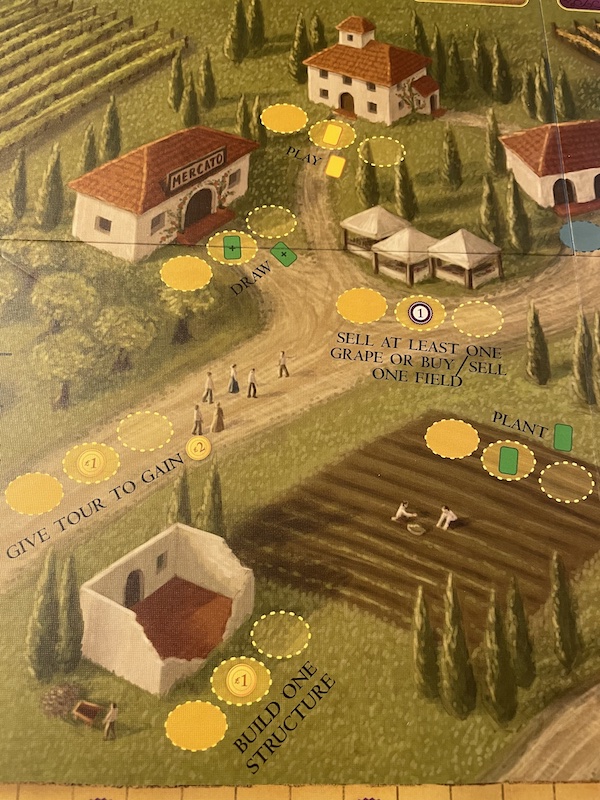 Players in Viticulture first take turns picking a player order during the Spring season; this is their “waking” order. This fairly innovative feature lets players pick a later turn order in exchange for some better benefit. If a player needs to be the very first player and that space is not yet taken, they can pick that space and get no benefit at all (besides being absolutely first). This is handy if you need to be sure you get the bonus for your first worker placement.

Once the turn order is decided, players take turns placing their workers on spaces available for the Summer season. This game has a few unique features and one of them is that there are two large rounds, Summer and Winter, where the available placement spaces are different for each season. Players can plant vines in the Summer and do various other actions such as give vineyard tours for cash, buy and sell fields, build buildings, etc. Autumn is a short season between the two big worker placement seasons when players draw some cards.

The cards in the game are not an innovation and work like cards in many other games; the cards simply provide extra free actions or unique combinations of actions that are not available on the board. I will explain more about the cards later. Once Winter arrives, players are again placing their workers, any that remain after being placed during the summer and gaining the benefits of their placements. In Winter, fields can be harvested, grapes can be made into wine, and wine can be sold. The seasons and years progress until a player reaches 20 points at which time the round/year is finished and the game is over.

The spring season is the time in the game where players pick the player order. The early bird gets the worm but the early player in this game gets nothing if they picked the top spot on the player order track; the first spot on the track provides no bonus. The second spot provides a vine card and the third spot provides a wine order card. The rest of the spots provide bonuses for Lira, visitor cards, and even an extra worker for the year when taking the very last spot on the track. At the end of each year, the “first player” token is passed counter-clockwise so that the player who picked their order last in the previous year now picks first. Order can be important since spaces to place workers can run out. This brings up a crucial aspect of the game that seems unique to Viticulture: each player has a “Grande” worker that can be placed on a location even if all of the worker spaces are full. With a single grande worker, managing this can be tricky.

In the summer season, players can only place workers on the summer spaces on the board. Managing workers can be tricky in this game because it’s hard to not want to keep playing until they are all used; workers need to be saved for any winter actions that a player wants to take because the summer workers stay in place until the end of the year. Viticulture provides a variety of worker placements spaces with some being absolutely necessary and some being secondary; it is essential that a player gain vine cards and plant vines in their fields but it is not essential that a player ever sell or buy a field. It is also very important to build structures such as a higher quality wine cellar and a trellis; wine can age and if the player has a limited wine cellar, they are stuck with low-level wine that brings a very low price. A trellis is necessary to plant wines of higher quality. Lacking a few essential buildings will leave a player with too long of a path to victory.

In the summer, players can give tours of their vineyard to get some cash. Wine cards can be drawn so gaining one on the player order track is not the only way to get them. Interestingly, players can also play Summer visitor cards. The visitor cards often let a player take multiple actions such as gaining a vine card and also planting that vine card in a field. There are many visitor cards and a variety of benefits making the game feel less restricted than just a pure worker-placement game. This random card mechanic is not at all unique and many games use random cards to break of the repetitive nature of work placement games. By using random cards, the game is not predictable and what leads a player to victory in one game might not be available in the next. Once all players have passed, summer is over and the season becomes autumn (or “fall” for you modern types).

Winter is the season in Viticulture when players harvest their grapes, make wine, and fill wine orders. Wine orders provide points and an increase in the player’s residual income. Workers can also be used to train new workers which is extremely important since everyone usually starts with two regular workers and must train more to be able to take more actions in later rounds/years.

Harvesting is interesting in Viticulture since the numbers on the grapes on the vine cards are added together to give a player one grape of each color (or sometimes just one grape if there is only one color in a field) regardless of how many vines cards they have in the field. The number is a quality, not a quantity value.

Players have a player board and it has spaces for grapes, wine, and various buildings they have built. If a numbered space for a grape already has a grape marker, the player simply places a newly harvested grape on a lower-numbered space. Winemaking consists of moving grape markers over onto the wine spaces in the cellar area of the player board. Again, there is one of each numbered space and if a space is full, a lower number space is used.

The cellar area has three groups of numbered spaces and cellar upgrade buildings are necessary to use the second and third groups. Those groups also have space for rosé wine and sparkling wine; those two special wines are made by combining grapes of two colors.

The winter placement spaces on the board also let players play a winter visitor card and a few other simpler and less common actions. In both summer and winter, there is a space that has no worker limit where players can gain a lira; there is never a time when a player cannot take some action even if it is rather minor in its effect.

I played the digital version of the game far more than the physical boxed version. They are essentially the same game with the exception of the style and ability of the opponents.

I like this game. The theme is fairly well integrated into the game compared to a game like Euphoria (another game from Stonemaier) and yet the stress of the game is a little lower than in a game like Trickerion. The game is more complex than other worker placement games like Asking for Trobils (which has hardly any mechanic other than just worker placements) or Everdell (which has a tableu building mechanic that is a large part of the game). There is still a lot of pressure to avoid less-meaningful moves in Viticulture and taking time to build up a good infrastructure can lead to having a lot of unused potential when another player triggers the end-of-game. It is important to get enough infrastructure built to start scoring points fairly soon in the game and then work to improve that infrastructure a little at a time so points are always being scored in most rounds. I beat the medium-level A.I. players in the digit version by spending a lot of effort planting vines and building cellar improvements and other things before just doing a lot of harvesting and winemaking in the last few rounds of the game. But that seems like it’s risky since I was behind for much of the game and a player being able to trigger the end of the game one round sooner would have left me far behind.

The things that stand out as interesting and/or unique are the player order selection, the grande worker, and the fact that every year, leftover grapes and wine age (get better). Yes, if you don’t make wine from grapes, their numeric value increased at the end of the year. Wine also increases as long as there is cellar space for it. I once left red and white grapes of level 3 in my grape storage because I needed a rosé wine of level 8. I would need to wait two years to age the wine to level 8 (3+3 results in a wine of level 6) but I had to wait for only one year to age the two grapes up a single level to allow me to make the level 8 wine.

The things that don’t seem so original or particularly interesting are the visitor cards and all of the cards in general. Although some random variation in the game is essential to keeping it playable over time, the random elements also sometimes give one player a big advantage. I had a lot of white grapes in one game and every single wine order card I drew wanted me to sell red wine. I kept drawing cards and I kept getting orders for red wine. This type of unlucky streak is what makes any game frustrating and is a problem for all games that have luck-based features like shuffled cards. If I were to compare this to some other worker placement game, I would compare it to Trickerion which has very little in the way of randomness. Yes, Trickerion has some dice that get rolled each round but they apply to all players equally. There are some randomly drawn cards in Trickerion but they play a slightly smaller role in the game than the cards in Viticulture. There is one other random feeling element of Viticulture that is also in most worker placement games; other players can take a placement that you wanted and now you must pick a different location to send your worker. This is one of the core features of worker placement games and it is what makes these games interesting.

I recommend this game. To be honest, I bought it because it is highly recommended already (without my recommendation being needed). I’m simply writing my thoughts about it in case someone is unsure about the game and finds what I have to say to be useful.