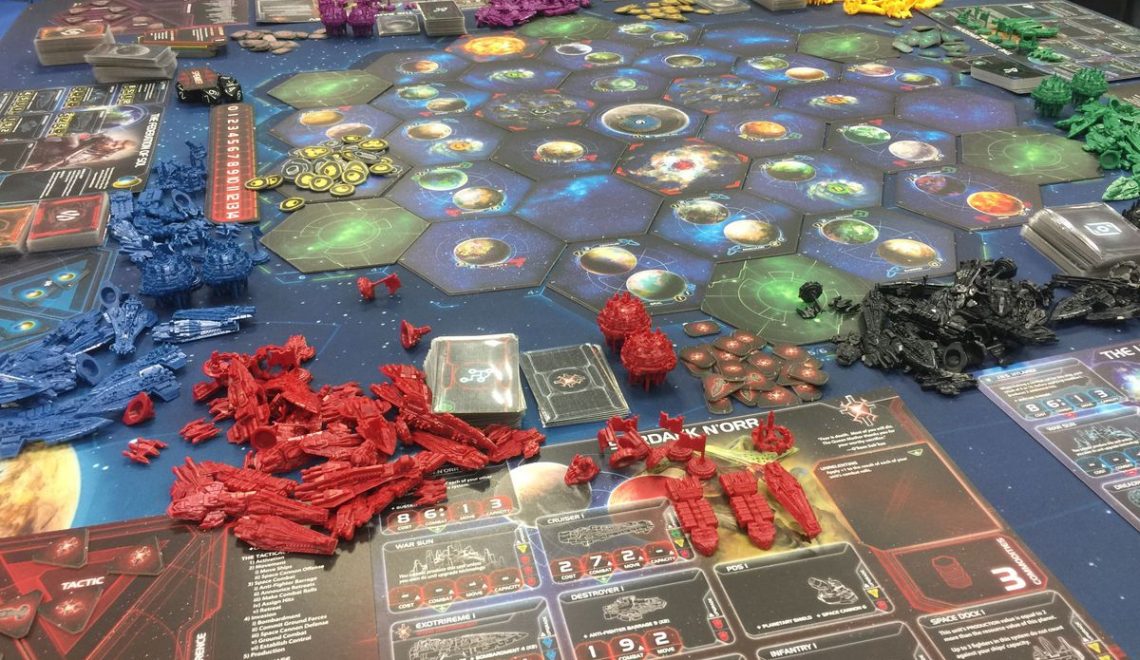 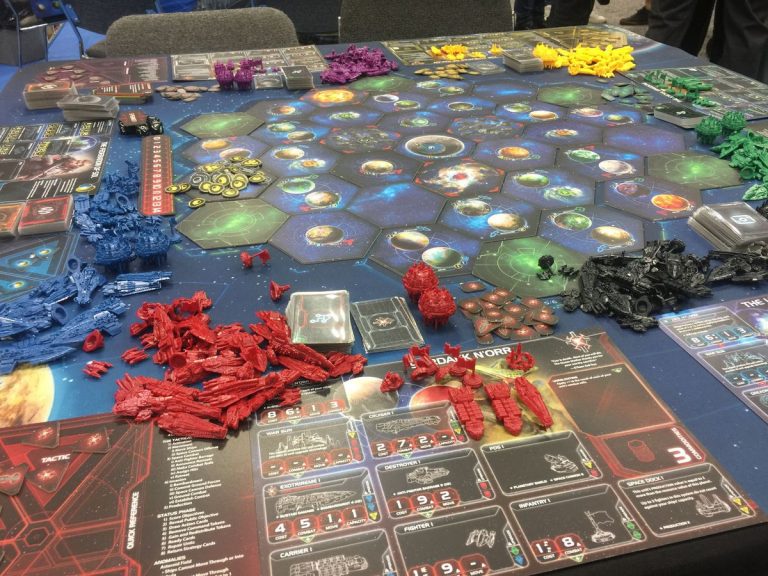 Four of us in the NTTTBGM played Twilight Imperium yesterday. It was a marathon for sure. We started at noon reading rules and watching a video. The rules seemed fairly clear and by 3:15 PM when our fourth player showed up, we had learned how to play and had played one round to see how it all fit in real play.

The game is big. The map takes up a lot of room because the plastic ships take up a lot of room. I do appreciate the quality of the game (4th edition), and the map art is very appropriate for the game. I dislike boards that are built from hex pieces since the map comes apart a bit during play. There’s no way around that when the map is changed for the number of players. The player map is fairly large with room for information on all ship types and with room for upgrades. There’s a second player mat that is sort of hex shaped and sits on one side or the other of the regular rectangular mat. It was clever making colored pieces for six players but having game pieces for 17 species/civilizations. But dealing with having two colors of pieces during the game is a small annoyance. It seems like there is no real good reason to have it that way unless the game makers wanted to fill big box for some reason.

Gameplay is boring. I just dislike 4X games. Exploration is just a matter of moving ships from one hex to another and there is no sense of discovery. Even in Eclipse where the map is built during exploration, it’s still not a strong mechanic with any feeling of discovery. Expansion is exploration so this could be just considered a 3X game. Exploitation is done by, well, exploration and expansion. Resources are “exploited” by gaining control over the planets in a hex (sector) which is what the first two X’s are all about. So now it’s really just a 2X game. The fourth X, Extermination, is a mater of having wars with neighbors. This is definitely unrelated to the one mechanic that is the first 3 X’s. Our game had very little war until towards the end. That could mostly be due to our having never played before and wanting to do all the other stuff without that distraction.

I had a race/species/civilization of traders (yes, I forget the in-game lingo, which is a little rude). I did take a little advantage of this and also got screwed up by not totally understanding resource usage. I wanted to get 2 points by spending 16 resources and collected almost the 16 goods I needed; I totally forgot that the planets have reusable resources and that I didn’t need more than a few goods to supplement my planet production. M upgrades ships a lot and got ahead on points by taking the center planet. He is by-far, a better game player than me for any game we have played. T did okay with gaining points by fulfilling goals, as did I. W didn’t really get into the game scoring much for some reason but did build and expand reasonably well. One thing that is good about this game over the other 4C game we play, Eclipse, is that military might and score are not synonymous. A person and have their territory and ships beat down to near nothing and still win. And that us exactly what happened as we all tried to stop the leader by attacking him.

Overall, I think this is a bette game than Eclipse. The scoring seems better but can also lead to a long game in some situations. The complexity of warfare is simpler (but still too slow for those not participating in a battle) and the various strategic mechanics of the game might let players interact more without it all being in battle. I think I’ll play it again a few times to see if I can find my grove.

One interesting thing to mention is that when I think about the exploration aspect of the game, I think that a bigger map with more useless space could be interesting. I imagine not being able to encounter a neighbor for a few more turns. I also imagine how not being able to build ships anywhere, being limited to the home world for instance, could make encountering the neighbors way more stressful and interesting. Think of how you could see someone amassing an army at their home world then having to move it out into the galaxy to get to you, all the while you are collecting resources and building defenses. Or maybe you are spreading out knowing that they can’t take all of your planets before you win. I’ll have to think about that sort of thing during a game and see if there’s a way to fit those strategies  onto the existing map.