This is totally different from all of my blog post these days. I generally post about computer stuff but I took a kayaking class and I wanted to document it in some way.

I took a Surf Zone class for sea kayaking. It is a class to learn about how to handle the surf zone but it is not a kayak surfing class. I used my 17 foot sea kayak, really my only kayak, and we did not surf at all.

Before I describe the class, I need to compliment the school and instructors. The class was through California Canoe and Kayak and the instructors were Matt Krizan and Jon La Commare. These guys were terrific in their professional yet casual and relaxed attitude and in how they instructed the class on the important aspects of the surf zone and the techniques we were learning while not babying anyone. Everyone got just the help they needed. It was one of the best days I’ve had in my kayak.

Someone else’s photo of the Yacht Club. We launched right here.

The class started out at the beach behind the Half Moon Bay Yacht Club. It was nice to have a place to sit in the morning before the kayaking started to meet everyone and get the initial instruction.

The Yacht Club is near the far pier.

From the Yacht Club, we paddled out through the breakwater and over to the beach.

Each person made a beach landing with one instructor on shore giving hand signals and one in the water selecting who would go next. Then we got one-on-one instruction for a while on how to handle the soup, the break, and broaching. High bracing skills, balance, and kayak edge control, were all very important and some of the tips and tricks that I learned are not things you could learn without having someone there to help get things right.

We had lunch and learned about waves (swells, really) and also about how the beach and conditions can change over time and why they change.

After lunch, we did circuits where one instructor helped launch us if needed and the other helped us land if needed. At this point, they watched for bad technique and helped anyone why ended up upside down or on their side. When landing a sea kayak, the trick is to not try to surf but to ride in just behind the breaking wave. On top of it is even better but in front is more dangerous and not necessary. Once the wave goes past, paddle your ass off to get to the soup, the foam area inside of where the waves are breaking, before the next wave breaks on you. 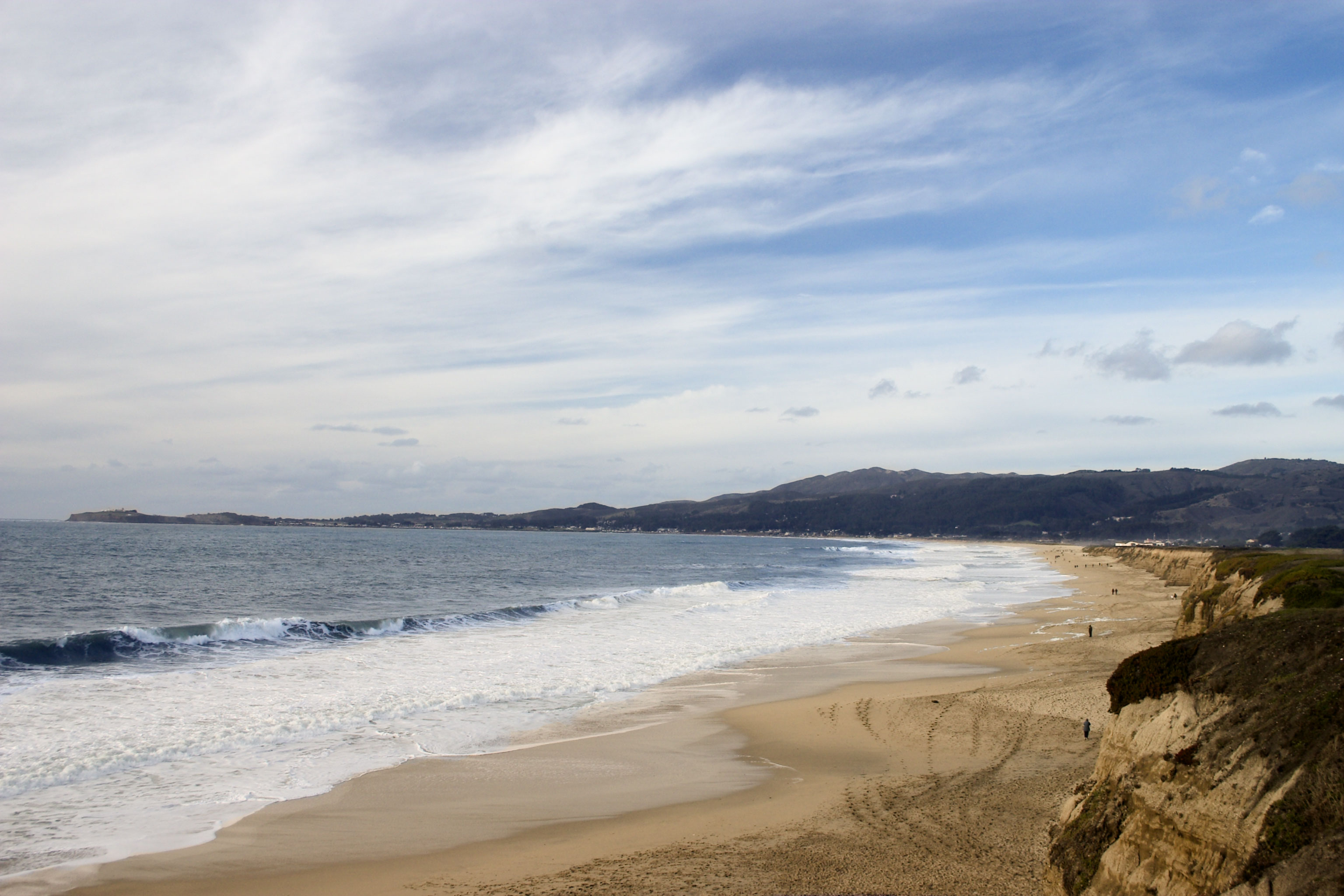 Padding was on the beach far in the distance.

I rolled over in a few feet of water twice. Once was because I was trying on purpose to let a wave break on me and it was a big one. The other time was earlier in the class while initially learning the broaching techniques. My braces were done very well and I had good edge control of my kayak according to the instructor. All that time in my boat playing on edge and rolling sure helped in the class.

The class ended with a nice paddle back to the beach and the yacht club where we cleaned up then had a drink with the group and talked about what we did that day. Most everyone liked the class and the instructors said it was one of their best classes. I think that they sometimes get people who cannot learn or get dumped a lot. Having a class of well qualified people to start with means that we all get some good instruction without anyone hogging the instructors.

Half moon bay is a neat place and the south facing beach was great for having waves small enough for us to learn on. I can’t wait to take the open ocean class where there are beach landing and rock garden kayaking, as well as some costal paddling and instruction for all things involved in paddling in the open ocean.