The original web interface for this program was designed to show the incoming and outgoing messages in a useful manner and also in a style that is similar to many text messaging apps. I have since then added filtering of the messages based on email address or team number.

Below is the main screen with the three main icons. 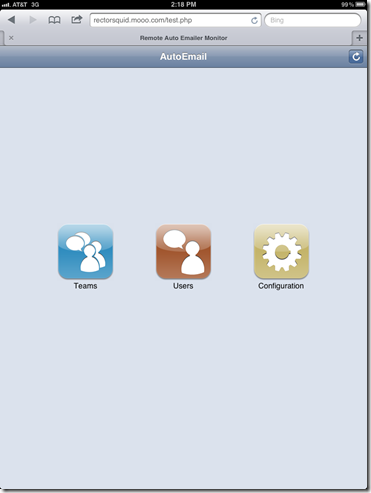 The Teams and Users icons bring up screens with filters for each team or for each registered user. The Configuration icon is for gaining access to a few of the configuration files on the server. 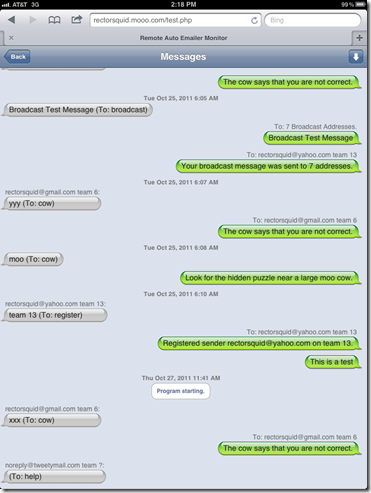 The messages, shown above for all teams, look like they would in a text messaging app. The biggest difference is that the incoming and outgoing messages, as well as the non-message items, are shown for all addresses and all internal events. The Program Starting event indicates that the auto emailer program started at that time. It is only useful to see that in the event of some sort of program crash but there are similar notifications for errors like being unable to access the mail server.

Below is a snap shot of the screen when the messages are filtered by users. I was just thinking about how the user address should show in the header instead of on any of the messages.

I did notice that there is a message there that is a forwarded message and it seems like it is not supposed to be there. Bugs will be bugs… 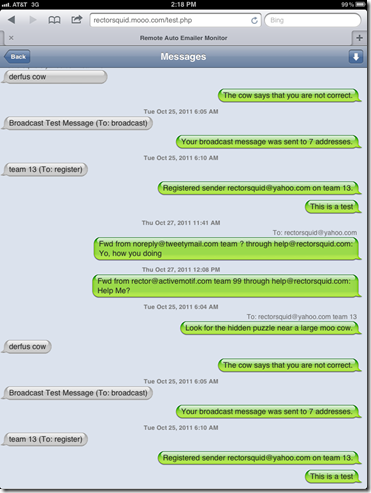 Finally, the configuration screen below is a work in progress. I had this feature working with only the configuration file visible but then added the user file and have yet to get it working. A few more lines of code and it should be done. 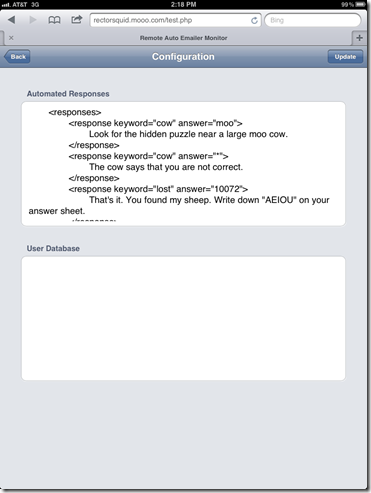 The scrolling of the configuration information was problematic because scrolling to the end of the data in a text area then caused the whole window to scroll. That is inconsistent with how a native app works so I implemented a fix for this that no one else seemed to be able to fix.

I want to note again in this post that I am using iScroll to handle the window scrolling. Although IOS 5 supposedly supports fixed divs and div scrolling, I had used iScroll to get this ability with IOS 4. I see no reason to change things at this time. iScroll might have features or work in a way that is as good as or better than the native scrolling available now and I don’t want to rewrite a lot of my code just yet.