I thought that I would mix things up on my blog and post about my experience with the controversial SimCity 2013. Having never written a review of something, this should be fun.

SimCity 5 was launched on Tuesday March 5, 2013. It was apparently not downloadable from Origin, the online game provider and security system, for quite a while that day. I had no trouble downloading it in the afternoon after updating my Origin client software.

After launch, I, like many others, discovered that the game was misnamed and should have been called SimCity Online or SimCity Connect or something similar. It could have been called SimCity MMO except that the online play, which is required and on at all times, is more like a game of Call of Duty online with up to five players who don’t cooperate or see each other very much at all. Since I have no friends that play SimCity, I am left to fend for myself or “play” with strangers.

I would have bought the game no matter what because this is the closest thing to a new SimCity as there will ever be.

But I could not play the game. The servers were overloaded. Apparently, the servers do a lot of work and they free up your PC to do other things. At least that’s what it seems like because there is no other reason to drive the tutorial from the server and have it hang because of the excessive server load. It’s a frickin’ tutorial so why it needs any connection to the server is beyond me. The engineers who designed the game seemed to make the client portion of it just a bit too reliant on the servers.

The Game Review – Limited to My Experience This Week

In this post, we are getting to the actual game review about as quickly as players got to play the game after the launch.

The first thing that is noticeable in the game is that the city size is smaller than in SimCity 4. This makes a lot of sense because this version of the game is a fully rendered 3D version. SimCity 4 had fixed viewing angles and major components of the city, the buildings, were pre-rendered. Typical computers just don’t yet have the power to render a city the size of a SimCity 4 city.

I can accept the smaller city size although it makes some things hard in the game. The makers of the game say that players can just make one city with lots of industry and another with lots of housing. It’s supposed to work great online that way but that would require lots of cooperation from the other players, more-so than in Call of Duty.

The gameplay seems very familiar once a city is started. Roads in SimCity 5 are not stuck on a grid, which is a nice addition to the game. Zoning is a bit different because zones are stuck to the roads. It is never quite clear how deep a zone is even though you see indications when adding the zone. The reason it is not quite clear is that the road dictates the density of the zones and roads can be easily upgraded at any time. It is just hard to get a densely packed city without resorting to making a grid. I’m not sure how it could be improved and it doesn’t hold back the game; it just makes it a little annoying at times when things are laid out wrong.

Another thing that is no longer part of the game is utility paths. Water and power are part of the roads and there are no power lines or pipes to be laid. I don’t miss the pipes and the power lines were only fun when there was a gap in the city that needed power lines to span it. The SimCity 5 city is so small that there will never be gaps.

The addition of a wind direction in SimCity 5 is neat. It forces you to place all industrial zones on one edge of the city to avoid air pollution everywhere else. No one outside you city complains about it. There is also ground pollution that builds up over time, or appears to build up. That brings me to a new feature of the game which is sewage. I don’t recall sewage being an issue in SimCity 4 but it is in SimCity 5. The only thing that is available in the game to deal with it when a city is young is a pumping station that seems to pump sewage onto the ground. you can place these pumps anywhere but there will be a lot of that ground pollution.

Ground pollution affects the water supply. The water supply is much more dynamic now and some areas have more water in their water table than others.

I’m sure that I am leaving out some major features but the gist of my comments above is that the game has new utility issues to deal with while also removing some utility features, like power lines.

Another aspect of the game that is interesting is the upgradable building feature. You can click on a medical clinic and add an ambulance or add an addition to hold more patients. The addition can be connected to the main building or to other additions in a variety of locations around the clinic. Firehouses, police stations, and other buildings all have this ability. Some building additions can be added as additional floors to existing buildings.

There are no subways. All underground features are gone in this version of the game. It makes sense to skip that feature since there would be a lot of programming involved just to give players subways. But the city is small and subways would help a lot even if their cost to the city was enormous. Many players online have commented that there will probably be a content add-on to the game to get subways – for a price. I would rather get larger cities in an updated version of the game.

There are lots of different road densities and the only reason so far to use a smaller density road is to save money when building the city. Upgrading is not hard or expensive until a road must be bulldozed to then create a wider road. Upgrades to roads that don’t change their width are quite easy. Maybe too easy.

Terrain editing is automatic and happens when roads are added or when buildings get built. This makes it hard to get a totally flat road on the side of a mountain. The game just doesn’t do a good job of flattening the terrain for roads in some situations. Why must the road go down a hill then across a bridge just to go up a hill in the other side and still have a little down slope onto the bridge on each end? The whole thing could have been built flat. It would have been nice to have some sort of manual mode for adding roads and bridges to get the best possible looking city. After all, people play this game to create great looking cities, not just cities that work well.

The cities look great. The graphics in the game almost make up for the smaller city size and slightly oddball terrain leveling.

The game requires that a player be online at all times to play. This means that laptop play is limited. This has been reported as a gameplay decision but it is clear that game developers are still more worried about people who steal the game than they worry about people who pay a lot of money for it. The idea that people paying for it should suffer through crap just because the distributor doesn’t want to lose money to pirates seems like a bad idea but it’s the case with software just like it is the case with grocery stores.

Other than the connection to the servers failing every so often, the game works fine otherwise. I had an error last night, a week after the miserable launch, that my city was screwed up and that I could abandon it or revert to an older version. This is where things got odd. I had been playing earlier and lost all of my progress when the server connection failed again but when I reverted to my older version of my city, is was the city that I thought I had lost, not the city as it was before that. What a cluster-f! of software development.

So as cool as the game is because it is now fully 3D and doesn’t restrict roads or zones to a grid, the DRM and server failures make the game hard to play at times. Fortunately, it is a game and no important work is ever lost.

This set of comments are what popped into my head just now. There are lots of other features that are new and improved from the older versions of SimCity. There are certainly a lot of nice features beyond what I had in 1989 when I bought this: 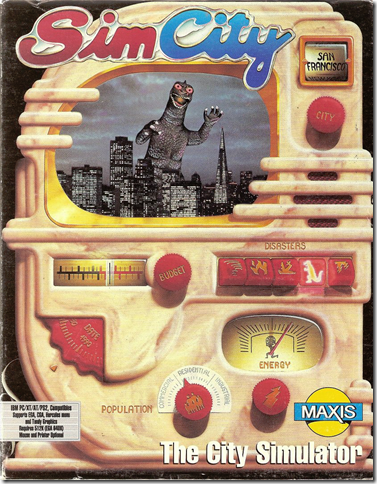 The game looks good and has some great features. The DRM is annoying and people should continue to complain about it so that software developers don’t move to a system where all software has constant troubles with server connections.

I did not review anything about city cooperation because the most that I’ve done of that is to buy power from one of my own cities nearby in the region. It worked but I have no idea what impact that had on the other city nor on the way my city worked otherwise. Maybe I will build a giant solar array in one city to power all others in the region.