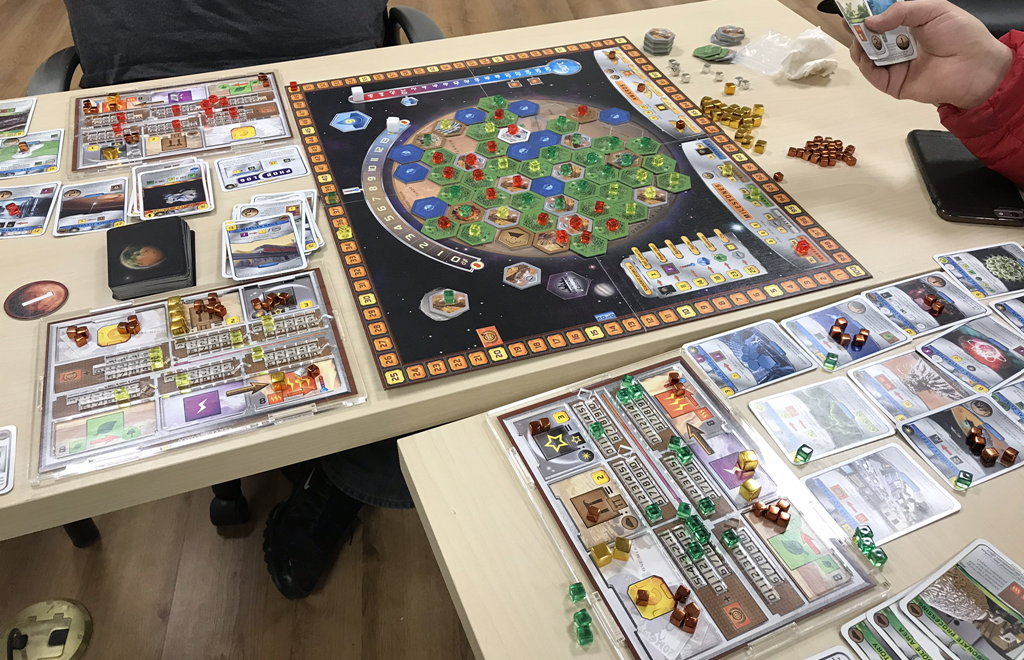 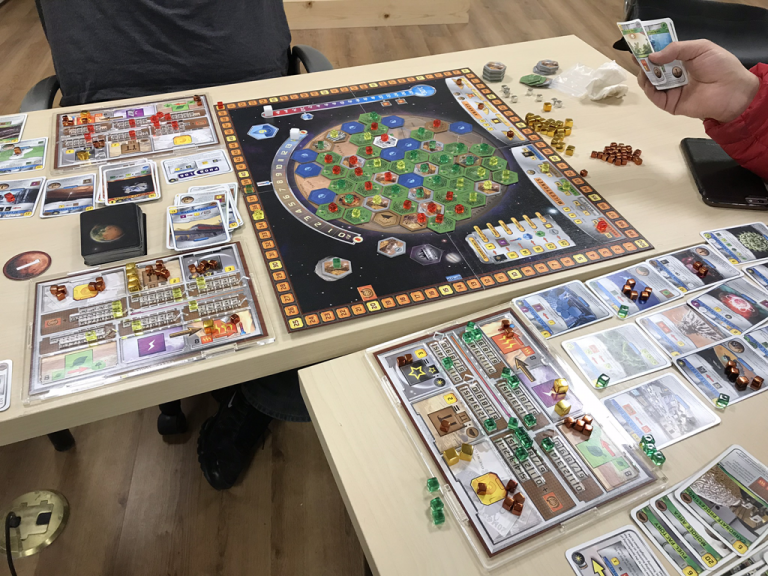 My daughter could not make it to the game group meeting on Sunday so some of us met on Saturday so she could play. Then the usual Sunday meeting happens but with the same people (less my daughter). A new game arrived and I called Tim and we got together last night to try it, making it three, yes 3, a whole whopping III game days in a row! 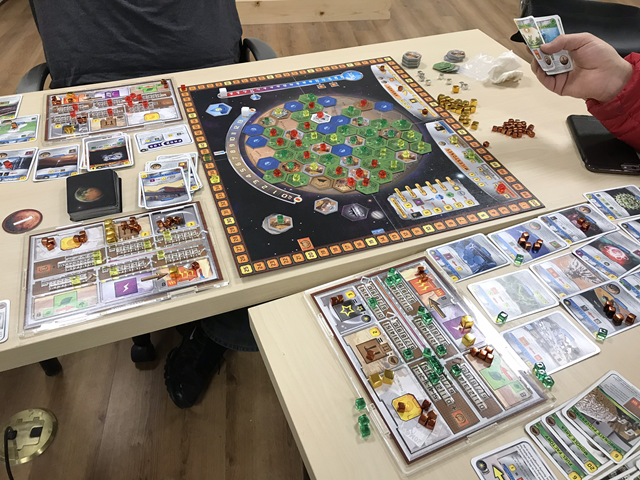 Our Actual Game Board (not a borrowed image form the internet)

I get better and better at some of the games we play but I still lose. In the picture above, I lost a lot but I did pass the green player to get 2nd place.

Tim and I have been playing a lot of TfM (Terraforming Mars). For a short time, we traded places on the top of the podium. I would win then he would win. But the last three group get-togethers had me lose every time. I think that Tim was starting to feel like he was too close to losing twice in a row and now plays harder. He doesn’t show it and is a natural when it comes to playing board games. But I think that he tries harder. In fact, he must try harder because I know that I’ve been playing a little better. 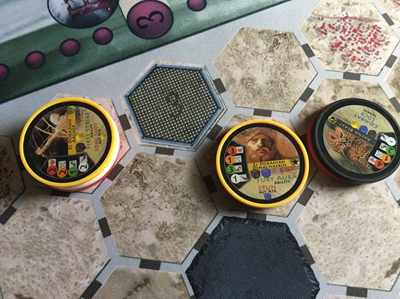 Last night, after trying Hoplomachus: the Lost Cities, we again played TfM. It was just 1-on-1 which is how wee like it these days. Tim had an early lead and got at least 4 TR (Terraforming Rating) ahead of me for a while. He had gotten some discount cards and rebate cards letting him play a variety of cards at a discounted price. He was also getting a few cards that let him place ocean tiles and raise heat at a discount, or something like that. While he did that, I was building up some energy production so I could later play an energy-to-titanium-and-oxygen card. That card let me trade in my excess energy, which I had a lot of for a while, for two very useful things. Oxygen is one of the terraforming  measurements and increasing it increased my TR. I caught up and we were about tied for TR for a while. I should mention that at this point, I already claimed the Builder milestone. So when I funded the Banker award and then two turns later played Heat, the energy-to-oxy card, and placed a greenery tile, all to raise my TR and get the TR milestone, he was sure he had lost. He was ready to flip the table. I kept my TR lead and funded the Miner award giving me 20 milestone/award points to his 10. But that’s just not as good as it sounds. In the end, he caught up to me in points with a city and some greenery tiles and then counted up his card points. He had the card that lets you get 2 points per generation on it as well as a few more basic point scoring cards. He passed me and won by at least 10 points. And the whole time, we was stressing out about losing!

This game saw me having the most blue cards of any game of TfM that I’ve played. It was not the 10 cards that Tim had but it was maybe 8 of them. I think I did well because I kept playing cards that had bonus’ on them, like playing a card with an Earth tag and cost me 3 credits less. Or large number of building tag cards and then playing the credit production increase that used building tags as the way to figure out the amount of the increase. I kept having a lot of good combos like that for nearly half the game. I also had that energy production that fed into the titanium/oxy scoring card. What lost the game for me was not having bought enough end-game cards earlier and running out of cards to play. I ended up buying tiles late in the game, which are a really ineffective at increasing the score. It seems like a playing a card is always more cost-effective compared to placing a city, greenery tile, or any TR increase. never pay full price for things in Terraforming Mars; always use a card to get a discount.

I played well but stalled out late in the game. Tim was consistent and pressure made him work harder.

Back to Hoplomachus: the Lost Cities…

Before playing TfM for the twentieth time, we tried Hoplomachus: the Lost Cities. There are other Hoplomachus games but this one was the first and supports three played. We had two.  neither of had any idea how to play so we just played a few turns using the rule book as a guide. Then we stumbled along just trying to play simple basic turns to learn the flow of the game. We did not take advantage of our gladiator abilities very often, like the archer being able to attack from more than one space away, nor did we know how to use the alternate attack abilities or the other special abilities of our pieces. At one point, we were really unsure about the rules since it seems totally unfair to get to a milestone on the Crowd Favor track and then have to give the reward to the other place just because they are behind. Well, Tim took it worse than me. We moved on. the only other rule that was a little unclear was the rule about how to play a Whirlwind attack. The book says to roll x number of blue dice depending on the number of opponents surrounding the gladiator. I was surrounded by 4 and there are only 2 blue dice. To be honest, this sort of thing just confuses me and the internet had no problem telling me I’m an idiot because of it. They say “Just roll the two of them twice",” but that doesn’t explain why there are more than two yellow dice in the game but only two of the blue. If we can roll the same die more than once, why not have one of each and leave it at that? Anyhow, because I’m wondering why there are only two in the box and if I’m misreading the rule or misplacing some dice, I’m considered an idiot. I just like rules that don’t have any room for interpretation. None.

I liked the game a bit more than Tim. He tends to not like the first game or two of a new game, compared to how much I like them. I see a lot of potential for this game and I know of another game group member, currently out-of-town, who might love this. This other player has brought pure abstract strategy games to the group before and is also a great game player. I think we’ll get my money’s worth.

I think I want to write a bit about board games rules. It’s an interesting topic because some games have terrible rules and some have great rules. I would rate Agricola as having the worse rules of any game ever, and Unfair as having the best. Terraforming Mars rules contained all of the information needed to play the game but the text about a red card being an “Event” card is buried in a paragraph that I just skimmed over because the topic of that paragraph, or was it two, was totally clear otherwise. It was like having some rules about how to walk and then in them saying “looking up will get you killed”. You read the first sentence and say to yourself “yes, I know how to walk. this paragraph is boring. I know this inside and out.” and then totally miss the important thing that will get you killed. So that’s how I missed the whole “red cards are events” sentence. And yes, it was even in parentheses as if it was a side note that was not too important. Still, that was the one thing I missed and any other rules problems were just us forgetting to play by the rules. I think that one player took their corporation special action 3 times in one generation because we were forgetting to limit that to just once. Another rules issue in TfM is on a card. It says something about playing another card with a plant tag, animal tag, or microbe tag, and then getting a plant, animal, or microbe. Animals and microbes are just markers on some other card and this card says “… add an animal to the card you are playing if it has an animal tag and add a microbe to it if it has a microbe tag…” This sort of thing bothers me because the card suggests that the player can add an animal or microbe to the card they just played based on the tag on it, or they player can get a plant if the tag is a plant, animal, or microbe. I want to interpret it as “if the card has a plant tag, you get a plant. If the card has an animal tag, you get an animal…” but the others in the group read the text exactly as written and it seem to not say that. It’s just me and my thinking the card wording is weird. Overall though, TfM has good rules.

Agricola had rules so bad that I read the book twice and could still not figure out to just place my workers on my turn on places that provided resources I wanted. A simple half-page walkthrough of a turn could have saved so much time. But no, they decided to describe the gameplay and organize it based on the resources, the farm, and anything but steps to take during a turn. It was a reference manual for the cards and the farm more than anything else.

Unfair has extremely consistent iconography, simple rules, and a manual that describes what to do on each step of your turn. We played a competitive game of it the very first time we played. I love Unfair just because they wrote such good rules.

I look forward to playing the new maps and the Venus-Next expansion to TfM. And the next few games of Hoplo will be fun too. But what I’m really looking forward too is my ignoring Tim’s complaints about losing and then beating him at TfM. His complaints probably make me play just a little worse because of guilt. No more of that!