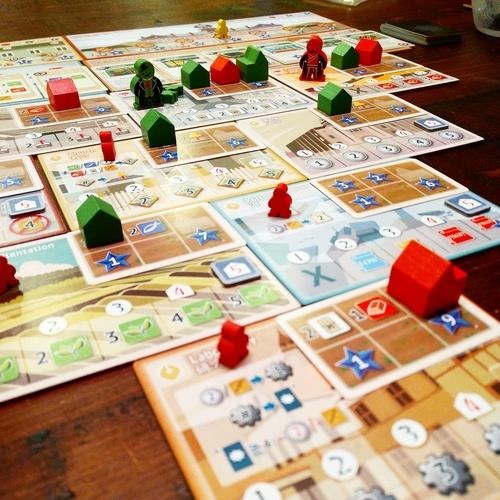 Wednesday, March 21, 2018 – Wednesday game night set a record with seven people showing up. A few of us hung out in the bar playing Get Lucky (the Kill Dr. Lucky card game) while waiting for the rest of the group to show, and for the power to come back on at the Tahoe Biltmore. It was raining all day and night, with 8 to 10 inches of snow to shovel this morning. 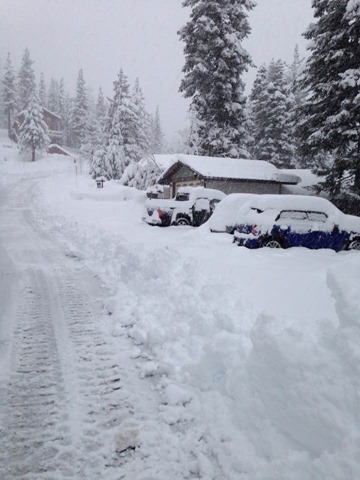 Snow the morning after game night

Once the power was on, we moved to the private dining room of the steak house restaurant, which is closed on slow week days, and split up into a group of 4 playing Yokohama and a group of 2 playing Terraforming Mars. The last person showed up just a little late and they let him play Terraforming Mars with the best starting hand they could give him. 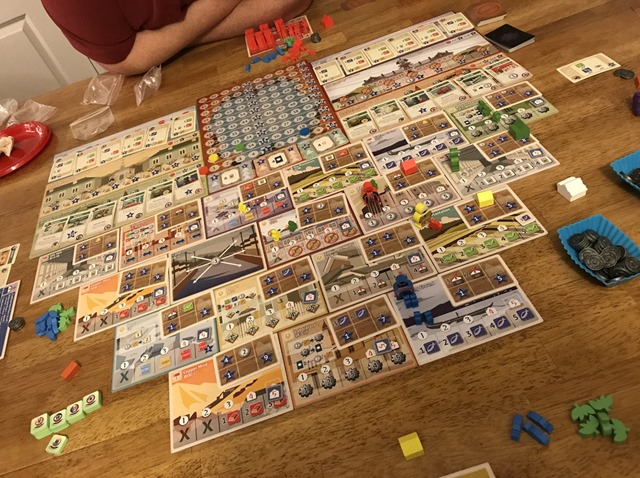 Yokohama (borrowed image of someone else playing)

I was playing Yokohama because I had asked that a member bring his copy. Unfortunately for me, worker-placement games are hard for me and I got a bit frustrated due to too much off-turn conversation and some slow turns. Maybe too much caffeine was making me impatient. It was a tough game and I lost badly. Bailey won even though she really didn’t like the game and wasn’t in a good mood either. I wasn’t in a bad mood, just anxious to play and tired of sitting around waiting for my turn. Four player games are like that and I think that I should only play in four player groups when I already know how to play a game well. The new guy, who was there for his second visit, probably thinks I’m an annoying jerk. That happens. I hope it doesn’t keep him from showing up every week because he’s really good at board games.

Yokohama is a worker placement game with no other major mechanics. You just place workers according to the games specific worker-placement techniques and then collect resources. As with most worker-placement games, picking the right resources and then leveraging them to get better resources or victory point is the way the game is played. There is a small amount of victory-point-salad where points come from some placement locations, from some bonus’ at placement locations, on some card that can be “bought” with other resources, and from left-over resources and coins at the end of the game. There is a placement location on the board where some rare resources can be traded in and a worker lost in order to claim a huge point bonus. I actually got the biggest bonus of 22 points from this location but it was too late and I had not much else going on to even get close to a win or tie for last. 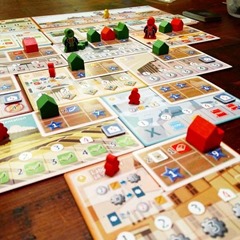 Bailey didn’t like the game because it had no sense of building things. She likes games where there is something that you construct or build up. Charterstone has buildings that are constantly being built in each players charter (town) and Unfair has a theme part being built using attraction and upgrade cards. Terraforming Mars has Mars being “built”. It’s clear that there are a lot of games where the player collects things, or places things on the board, in a way that “builds” something. Unfortunately, Yokohama lacks any such thing and is just a place/collect-resource/pay/place… sort of game. So I sort of get the lack of appeal that this game has to her.

I like it. Mostly because I suck at it and its sort of cool looking. Also, the worker placement is done in a way different from all other worker-placement games I’ve played. You place slaves/mercs/minions/assistants at various locations on the playing area and then move around a master/leader/dictator/president to various locations to take action there. You need to sometimes build up a collection of assistants at a location so that you can “score” more when your president gets there. You can fairly easily increase you assistant count during the game although I screwed up and got more than I could use last night.

The Terraformming Mars players finished close to when we finished Yokohama and a few players went home. 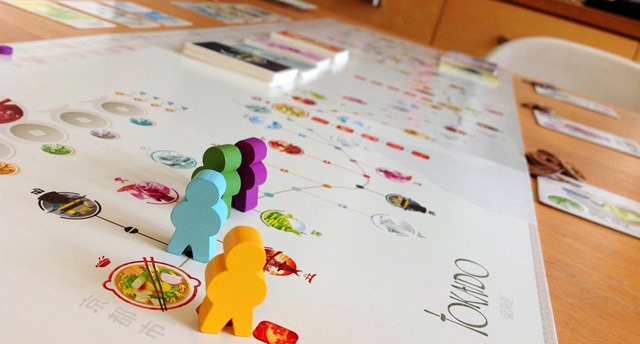 We played Tokaido with five players and it was tough. One player started out badly and was a little unhappy when he could not buy food at the inn. He managed to keep up with the rest of us, score-size, and the game was fairly close in the end. The new guy won by at least six points, which is pretty good. Tokaido is a game with very subtle and minimal strategy. It also relies a bit much on luck-of-the-draw. As a semi-casual game for maybe three people max, it’s quite fun to play. Five players with any game is a bit crowded and less fun.

Sunday will be a little more interesting with just two of us planning on playing. I’m pretty sure that we’ll play Terraforming Mars followed by Antiquity like the last time there was just two of us. Maybe I’ll push for something different for one of the games. We’ll see.

P.S. Do people sign their posts on their own blog when no one else is allowed to post? it seems redundant but I did it anyhow.