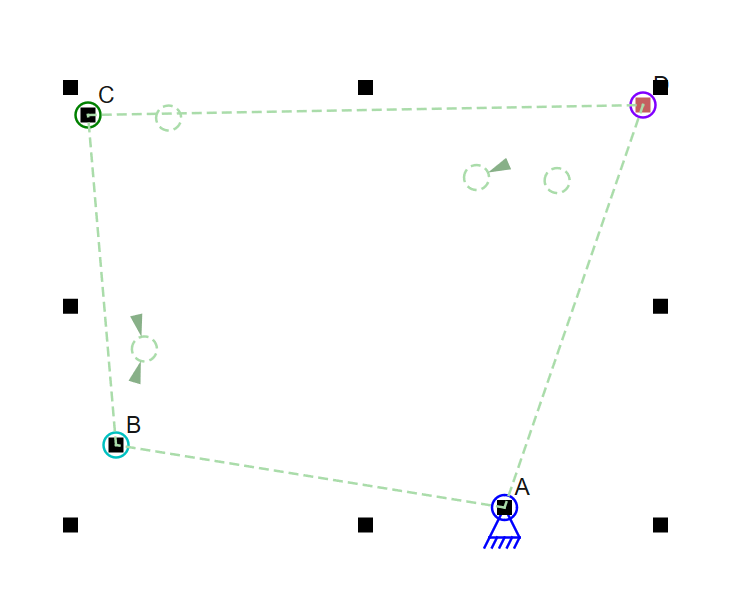 I’m in the process if adding a new Hint feature to the Linkage program. When I was designing a mechanism recently, I had to do a series of adjustments in order to find the pivot point of a link based on two points that an end of that link would pass through. In other words, the points on the circular path of a connector are known and the center of the circle need to be calculated. Here’s how I calculated this before:

What a pain in the ass. So I added a “Perpendicular” feature that does much of that for me. Now the steps are this:

It’s still going to take steps 1 though 4 to add the necessary elements but steps 5 through 8 have been reduced to a single operation.

Now for the visually interesting part of this; I added hints for the various features that are available for selected elements. The Linkage program already had a few hints, like the one where four selected connectors get a hint circle drawn where the second and third selected connectors would meet if rotated around the first and last respectively. Now there are a bunch of hints as seen in the following two pictures. 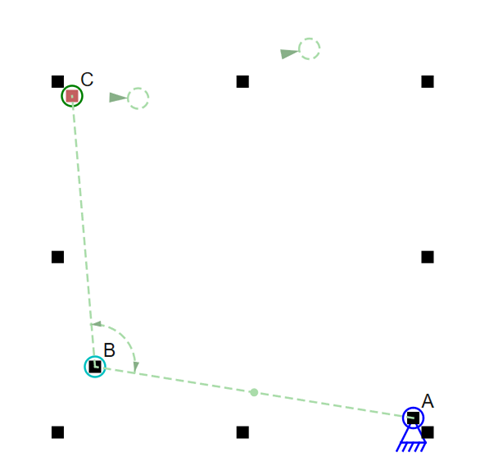 The circle and arrow closest to C shows where C will go if the “Right Angle” feature is used. The further away circle shows where C will go if the “perpendicular” feature is used. There is a small dot at the midpoint between A and B to show a hint about how the “perpendicular” feature uses the midpoint of that line. The old hints that show that angles can be set, and that the angle is also shown in the tool bar, are still there. 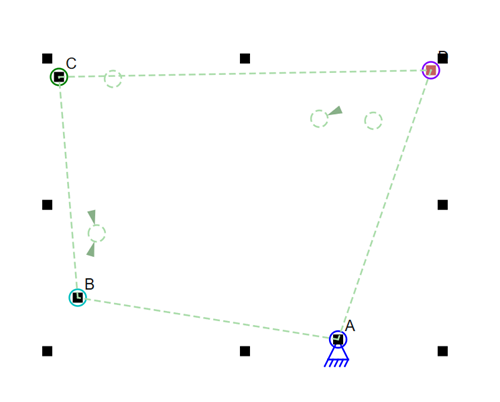 For four selected connectors, the hints are shown for the “Meet”, “Rectangle”, and “Parallelogram” features. The circles with no arrows are for the rectangle. The circle with one arrow is for the parallelogram, and the circle with two arrows is for when B and C are rotated to meet each other.

Now for the really clever part. I’m writing code to do these operations when any of these circles is clicked! The most important design paradigm in the Linkage program is the reduction of clicks to accomplish common tasks. These are not totally common tasks but reducing the clicks to open the “Align” menu and select an alignment feature makes a big difference when doing a lot of these.

I also added the “H” key as a shortcut to turn on and off the hint lines and circles.

I hope to release a new version of the Linkage program in a week or so. It needs some testing before a release and I don’t have a lot of time at the moment.