I don’t often write about computer games, but two iPad games that I recently player seemed outstanding to me. 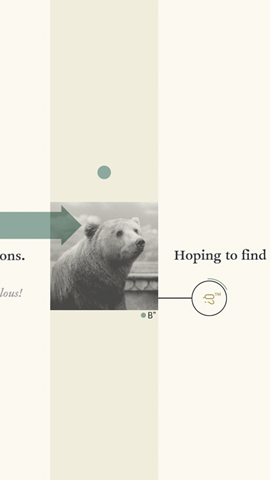 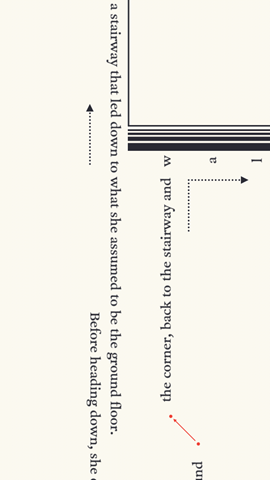 This was one of the most unusual games that I’ve ever played. The “game” consists of a small number of puzzles wrapped up in an interactive story. The puzzle clues are presented within the story, as are the puzzles themselves. A clue might, for instance, be part of an image on the written page. The bear in the above-right picture, is a clue. In fact, tapping on the circle button connected to that picture causes the bear to “speak," giving the clue.

The presentation of the story is done using the written word, with a bit of visual style. The text forms a map, and is shown on the page in a way that fits with the content of the story. Walking down a long corridor is described using a single long line of text. Turning a bend is described with text that literally turns a corner.

I found all of the puzzle reasonably easy, with the exception of the puzzle in Chapter 3. For some reason, I saw a lot of clues that were just meaningless decoration. There were no such distractions in the other chapters. 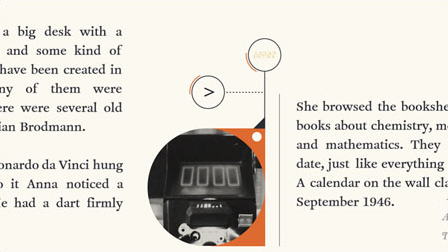 DEVICE 6 is worth playing, for anyone who likes artistic daring, puzzles, and creepiness.

Monument Valley also has a unique style. It’s not nearly as serious about diverging from the norm, as was DEVICE 6, but it does have some new and interesting concepts that are worth mentioning. 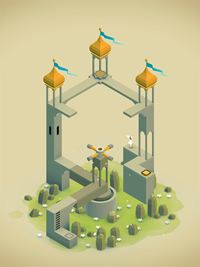 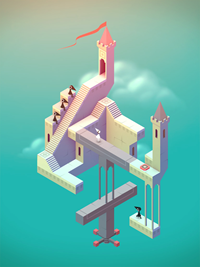 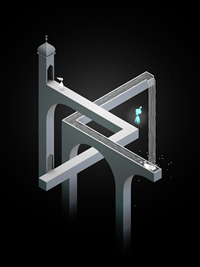 The game reeks of M.C. Escher. The artistic style is simple and vivid, while also being perspective-less 3D (isometric). The puzzles would be simple if not for the fact that the nature of this 3D world allows for physically impossible structures. The images above should make that clear enough. The character, a silent Princess, moves about the impossible structures in impossible ways. It’s this 3D trickery that makes the game so fascinating. The simple and direct artistic style fits perfectly with the absurd 3D of the game, making this a complete visual treat.