The most recent game that we tried, my family and I, was Castle Panic.

I must admit that I’ve been buying games that I’ve seen on TableTop. There are many of the games on the show that I have not bought and are not appealing to me. But a lot of the games that they play on the show look very cool. I recommend TableTop as a way to see actual gameplay of a variety of game types. 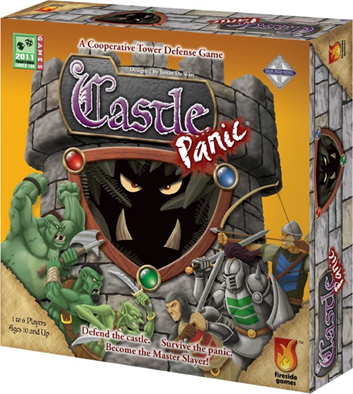 The players of Castle Panic work together to defend the castle from hordes of monsters.

Here are the complete rules.

The game is set up with a castle in the middle of the board and rings of approaching monsters around it. 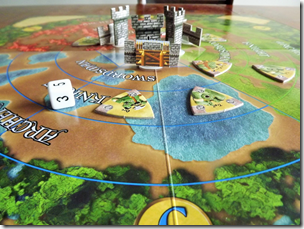 Each player takes a turn that entails drawing and trading cards, which represent defenders of the castle, and then playing those cards. At the end of each players turn, they move and draw new monster cards that are played by rolling a die. Strategy in the game is complex and the discarding/drawing and trading of cards has a large effect on the outcome of the game.

Me, my wife, and my daughter, all played together. We played the game twice and my review is based on those two games. The first game was a disaster and we lost our castle quickly. We did much better in the second game but still lost to the monsters.

We discovered that it is important to look a few moves ahead when discarding cards and when trading cards. Each player gets to discard a card and then draw a new one. A player can trade a card with another player during their turn. After the drawing, discarding, and trading, the cards are played. Interestingly, a player can play any and all of their cards damaging and killing as many monsters as possible.

We did okay in the first game for at least two or three minutes until we pulled out the boulder monster card. The boulder rolls across the board and destroys monsters and castle parts equally. A few turns later, another boulder wiped out 4 of the six sides of our castle. We were doomed. Two monsters got into the castle and took out the rest of the towers before we had a chance to stop them.

The monsters are all played. So are the boulder cards and all of the other monster cards. The only way to win is to play them all and still have a standing tower in the castle when they have all been defeated. If the easy-to-kill monsters come up a lot in the beginning, the devastating boulder cards will come up later. So will plague cards and others.

The second game ended with one single monster making it into the inner sanctum of our castle with no monsters left and none of the players having a card to defeat it. We almost won.

This is a fun game and working as a team is a nice change from the games that we usually play. The rules are easy to understand after one or two rounds of play, which makes this a good game for impatient gamers. 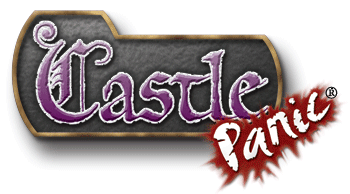