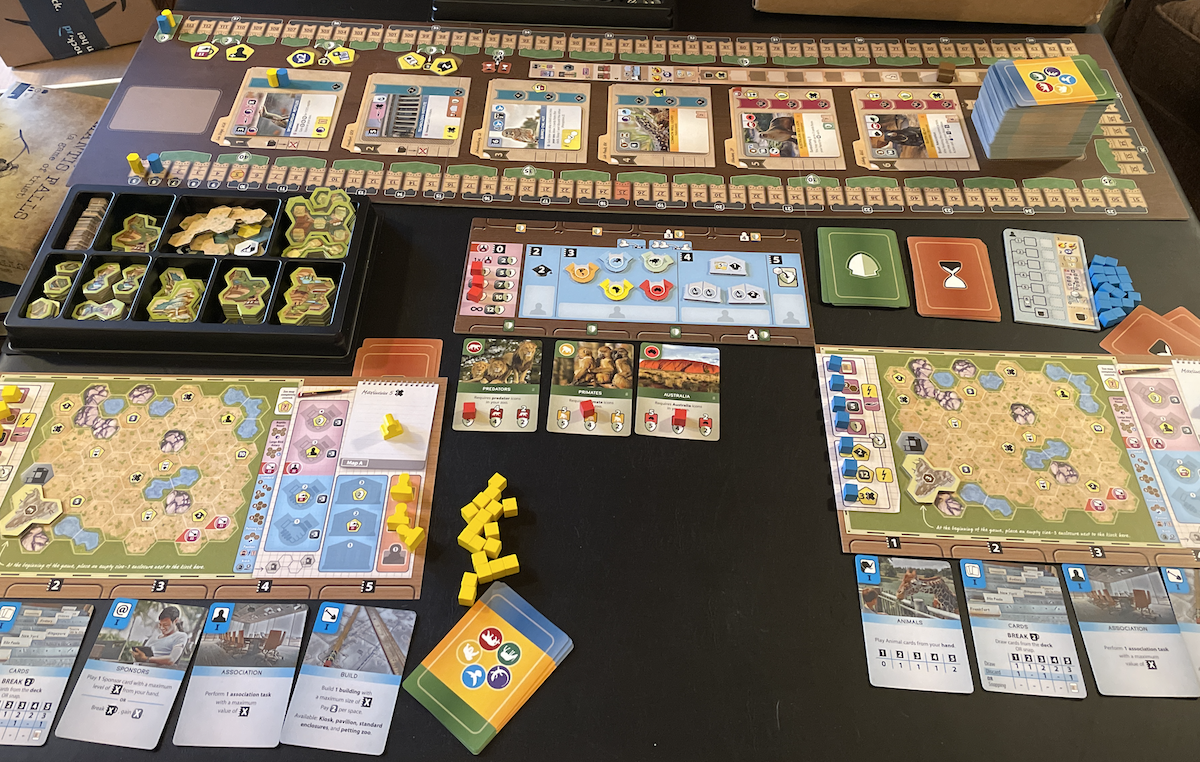 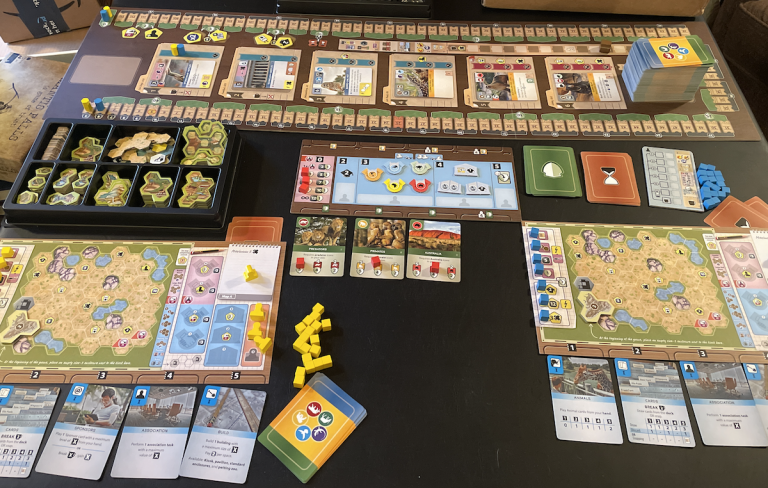 I was recently able to play Ark Nova 2.25 times. Two of the games were real games with 4 players and then 2 players. The other quarter of a game was my solo learning game where I played each of 2 players myself.

Ark Nova is a zoo-themed board game that lets players “build a zoo”. The zoo building process includes building enclosures, adding animals to the zoo, “hiring” various specialists, creating associations with outside zoos and universities, and supporting various types of conservation “projects.” To accomplish these things, players take turns performing actions until one of the players reaches a milestone of having their zoo Appeal reach a balance, of sorts, with their Conservation rating.

Players take their actions using action cards. These cards are all the same for all players and it is the order, or placement of the card, that determines the card strength. Once a card is used for an action, it moves to the “1” strength position thus increasing the strength of some of the remaining cards that are moved to make room for it. The card strength mechanic leads to interesting action decisions beyond just picking which card to use. Players also get the chance to gain +1 strength tokens (which are unexpectedly “X” shaped even though they are additions, not multiplications) that can be added to cards to increase their strength value.

The actions cards are upgradeable and some actions cannot be done without using an upgraded action card. The game is designed well visually and the card colors, blue for basic actions and pink for the upgraded actions, are also used in various places in the game to show if an upgraded card is needed. For example, creating an association with a third outside zoo requires an upgraded Association card and the space to place the assocition marker is pink to denote that requirement.

Many spaces in both the zoo map and elsewhere contain bonuses that are gained when a marker is placed there. The scoring board also has bonus spaces; These bonus spaces help players gain momentum in the game. Speaking of the scoring board, there are actually three different “score” values tracked during the game. The “Reputation” value is not used in the final scoring but does determine what visible cards a player can pick, as well as having bonus spaces at various reputation levels. The “Appeal” score track is essentially the victory point (VP) track and, combined with the “Conservation” track, is used to calculate the final score in the game. Apeal is gained for things like placing animals in the zoo, while Consevation points are gained by contributing to conservation “projects.”

Gameplay progresses with each player taking an action based on one of their action cards and using the strength determined by the card location. Some actions advance the “break” token that eventually reaches the “take a break” space, thus ending the round. This game round structure is similar to other games where the round is over after a variable number of player actions, while this particular mechanism is still a bit new and unique feeling. Ending a round at a specific time can be a strategic move since players will be required to discard excess cards during the break. The end of the round lets players gain income based on the appeal of their zoos and based on some of the content of their zoos. There are also cards that give some income as are there conservation project trackers that, when moved onto a conservation card, reveal additional income at the end of each round.

The most notable, albeit derivitive, mechanic in the game is the cardplay. There are hundreds of cards in the game that represent animals, volunteers or workers, specialty enclosures, conservation projects, etc. These cards are all part of one large shuffled deck and players are expected to work with the cards they draw in order to build the best possible zoo. There are essentially three types of cards; Animal cards with a yellow stripe, Sponsor cards with a blue stripe, and Conservation cards with a green stripe. Each of these types of cards is played by taking an appropriate actions such as the Sponsorship action used for playing Sponsor cards and the Association action to play Conservation cards. I mentioned cards that represent employees (or volunteers, specialists, or whatever) as well as cards that gain the player a unique enclosure – these cards and others like them are all Sponsor cards and require taking the Sponsorship action even though the content of the cards varys quite a bit. Many cards have requirements in the form of icons and a player must already have the required icons in their zoo (on other cards and on associated zoos and universities) in order to play a card with those requirements. A newly played card will add to the icons to a zoo and this and other aspects of cards can trigger ongoing effects on previously played cards. By selecting and playing the appropriate cards in the appropriate order, a player can gain a significant advantage. During one game, I had a sponsor card that would give me one Appeal point for every connected (to the buildings in my zoo) empty border space. By building the enclosures in my zoo in a specific manner and then playing the card at the optimal time, I was able to gain significant points from it. Had I played it sooner, I would not have gotten so much from it. Alas, keeping a card for many rounds is tricky since the default maximum hand size is just three cards (although that limit only applies at the end of the round, not during the round).

Conservation cards are interesting because they allow a player to place a conservation marker on the card when played and then others can also place markers on that same card. There are only three spaces on a typical conservation card and each requires a different number of items in order to satisfy the conservation project requirement. Conservation itself is enormously important in the game because the end scoring is based on both the Appeal of the zoo as well as the Conservation score of the zoo. The points for these two things are tracked opposite each other on the score tracks and the distance of the Appeal marker compared to the Conservation marker is used for the final score. Negative scores are possible but unlikely for a player that has played Ark Nova more than once.

Zoo building itself is a fun Tetris-like mini-game. The enclosures in a zoo are represented by tiles that are 1, 2, etc., hexagons connected in a group and the number of hexagons is essentially the size of the enclosure. There are also kiosks and pavilions in the game that are single-space buildings that provide income or points depending on which you choose to build. So while you are sitting trying to optimize your actions based on the position of your action cards while also examining your cards and the visible cards in the middle of the table, you are also thinking about where to place various enclosures for the animal cards you have in your hand. You might even need to place enclosures next to water or rock features in order to use the enclosure for specific animals.

There are quite a few small details of the game that make it seem complex and this is definitely not a lightweight game. Some of the sponsor cards have complex side effects. There are a lot of choices about when to play a card, which cards to keep, where to place an enclosure and what size it should be, and so on, to the point of making this a hard game. But it is also fairly simple with there only being five different actions (or six if the “take a plus token instead of taking a card action” action is taken) and each of these by itself is not too complicated.

This game uses action cards slightly similar to Race for the Galaxy. I’m at a loss for what other games also use action cards like this and which might also have the strength of actions altered in the same way as Ark Nova. Ark Nova also uses the “hand” cards in a very similar way to Terraforming Mars and TfM is the game most often compared to Ark Nova. Numerous other games have hexagon maps although Ark Nova is the only game that I’ve played where the hex pieces are of a variety of shapes that fit onto the hexagon map in a Tetris-style. I do have games like Whistle Mountain, Isle of Cats, etc., that have square-based Tetris-style tile placement but this is the first I’ve played that used hexagons (a minor difference). The card market in Ark Nova is not at all unusual (Unfair has a card market) but the way cards are drawn and how many and how often they are drawn is unique to Ark Nova (in my experience).

The main challenge of this game and the part that seems unique to me is the scoring of victory points based on the distance between the Conservation marker and the Appeal marker on their respective score tracks. Conservation is of significant importance in the game and is hard to come by in the early stages, It is easily forgotten but this is where the most points can be gained due to the difference in step size between the two tracks (1 space on the conservation track is multiple spaces on the Appeal track). Players need to make sure they do not forget about conservation or near-zero or negative scores are likely.

Overall, I enjoyed the game each time I played. I never finished the 2-player “solo” game and since I was teaching the game to new players, I scored -30 the second time. In the most recent game against my daughter, who doesn’t need supervision during a new-ish game, I scored about 20 points. Of course Bailey scored about 30 points, being a better player than me. it was fun and I really want to play this game again. I see lots of areas where I can make small improvements and I look forward to the next game where I can try those improvements.