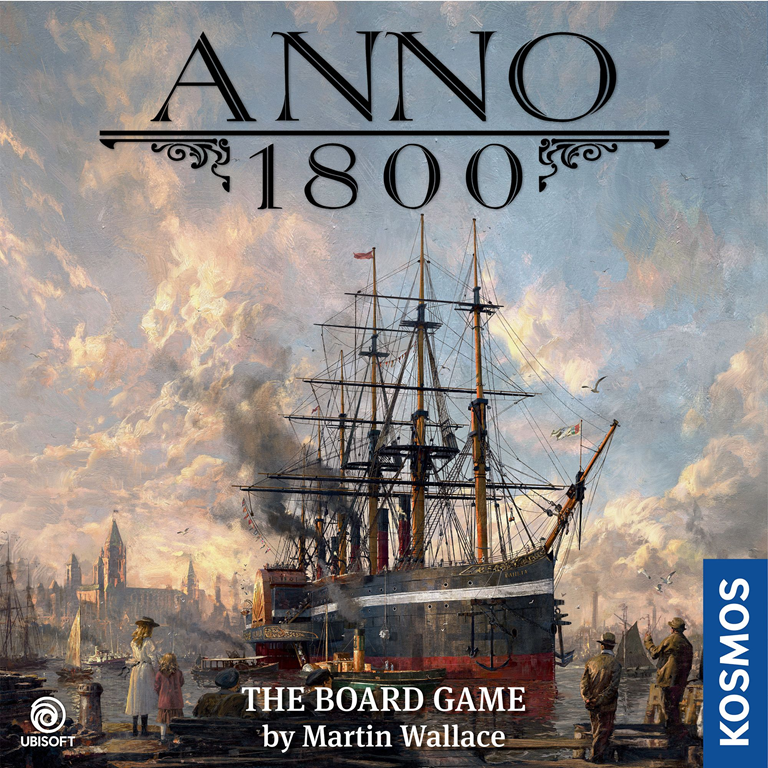 Anno 1800 is a board game designed by Martin Wallace (Brass, Rocketmen). It is a medium to heavy game that takes at least two hours to play. I played it for the first time a few days ago and thoroughly enjoyed it.

Anno 1800 is a crafting game that uses worker-placement for generating resources. A player will move a population cube to a construction token on their player board. This causes the immediate generation of the resource on the constructions cube and since it is used immediately, there are no resource tokens. The player then takes a new construction token from the main board that they just “paid for” using the generated resources and they place it on their player board. The player can now generate this new resource in a subsequent turn using this new construction token. Players can also build ships and ships come with trade or exploration tokens depending on the type of ship built. Trade tokens are used to get resources that another player might supply. Traded resources are not physically moved from one player to another since there are no resource tokens; the player who makes the trade simply has access to the needed resource and the other player gets money from the bank for the trade. Exploration tokens allow players to expand the space on their player board and also allow them to access additional resources that are only traded and never generated.

That’s essentially the entire game. It should only take experienced board game players a moment to recognize the way resources are generated and used. Newer board gamers will need to understand that since you spend a resource the moment you generate it, there are no tokens for them. There are also far too many different types of resources for a token-based system anyhow! For trade and exploration, there are tokens and they are saved up to use. One mistake we made in my first game was to spend the trade and exploration tokens by placing them back in the bank. This is wrong and they needed to be saved next to our player board so that later in the game when we also recovered all of our workers that had been used in previous turns, we also would recover the trade and exploration tokens, placing them back on the ships that they came with. We figured out the mistake about 2 hours into the game although some of that 2 hours was spent reading rules, doing setup, and even the actual unboxing of the game.

The game is not as pretty on the table as the artwork is on the box. In the picture above, you can see two player boards and a central board with all of the construction tokens. In addition to players taking the actions I described earlier, they also have one card for each of their population cubes and it is these cards that grant points and also provide one-time benefits when played. Like with the construction tokens, a card can be played when a player generated the resources needed for the card. And as before, the player would move population cubes to construction tokens on their player board and also do some trading if needed, and then play the card. In the foreground of the image above, you can see a single card with a person pictured on it. This card has been played out of my hand and at any time during any of my turns, I can take the benefit of this card. Many cards have a benefit that would be taken the moment the card is played, The card pictured provides a new-world resource that I didn’t need when I played the card.

The game also has some common goal cards that are randomly picked from a small deck. Some of these are goals and some just let you do an exchange or trade of some sort.

It is interesting that the end of the game is triggered by one player running out of cards. It is more interesting that if you gain a population cube, you will need to draw a card appropriate for the type (color) of the cube. For a while, the game felt overwhelming because our hands of cards kept growing. It was especially obvious to me because I played cards that gave me the immediate benefit of getting more population cubes. Population cubes can be upgraded from one color to the next and this doesn’t result in any card exchanges.

Points are generated by playing population cards. The benefit on a card doesn’t need to be activated (gained) in order to get the points and I ended the game with a few played cards simply sitting out in front of me – gaining more population near the end of the game would have made the game longer and possibly led to a loss. I won by 3 points, 152 to 149. Points come from the population cards, from the common goal cards, and also from exploration cards that provide a few points per population cube if the player can match the cubes by color to the spaces on these cards. The exploration cards are a nice touch because they give the players incentive to have certain colored population cubes at the end of the game.

The game was fun even if it took five hours to unbox, set up, and play. It would have been an hour shorter had we played the trade and exploration tokens properly. I suspect that for two players, the 120 minute listing on the box might be accurate. I also think that it will be a three-hour game for three players and a four-hour game for four players.

For players who are fairly experienced and like games of resource management with only a bit of player interaction, this is a good game. It could be a great game for those that like the technology tree and how players grow their construction capabilities throughout the game while looking for the quickest path to victory. It is a game where efficiency is rewarded. For players that like maps or like to place one worker on a turn to do one action, this might not be your thing. And if you like 4X or storytelling games, this is not your game. I fall into the first category and although I find it hard to be efficient at this type of game, the structure of the game let me focus on that efficiency without distractions of other mechanisms getting in the way.