I worked on this a few years ago. The idea is that the arms go around and around and the wings flap. The mechanism is made to look interesting. I took the photos last night since I had never documented this sculpture before and I’m in a blogging mood. 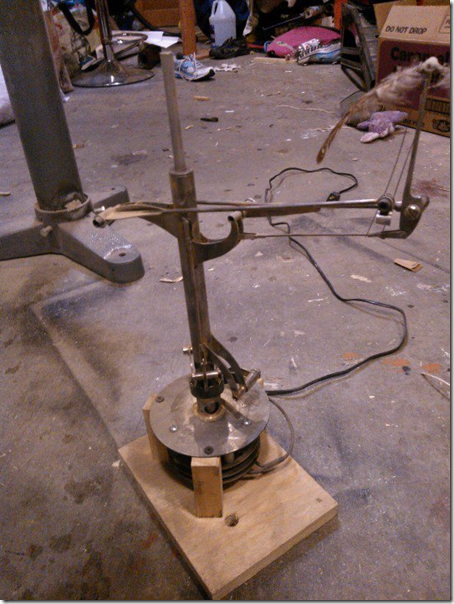 I had started out with metal wings but then got the idea to use feathers. The feathers are a better contrast to the metal parts but getting them to flap the right amount was a problem. I didn’t leverage the arm correctly and it barely moves. I am considering changing the pivot point to get a little more flapping motion. Doing that would also let me change where the flap arm connects to the feathers themselves making things a little less… wobbly? Unpredictable? Uneven? Something like that. 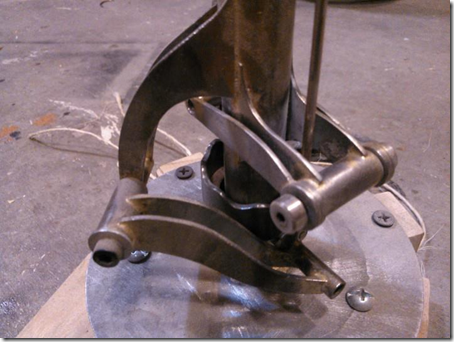 The movement of the arms is controlled by fixed cams. The cam followers move in a circle with the main shaft tube. In the picture above, you can see the pivot for the main arm. The follower is down and to the right of it and rides on the bottom of a larger sloped tube. This gives the feathers a gently up and down motion as they go around once. To the right is the pivot point for the flapping arm. The pivot is on one side of the sculpture and the attachment to the arm and the cam follower are on the opposite side of the sculpture. Both of the cam follower arms needed to have a long enough throw to not bind or cause excess friction and making them artistic was, well, just to be artistic. 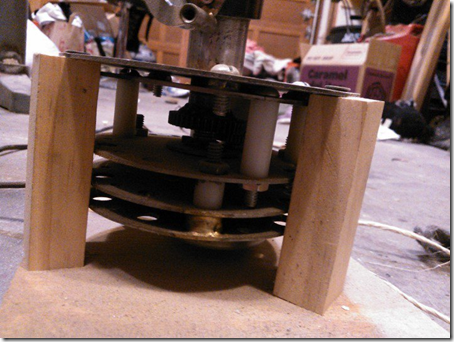 I took two gear boxes, or gearboxes, and built one from the parts. This was needed because I didn’t have a motor and gearbox that went slow enough for me needs. Part of the customization is needed because of the inner shaft that stick out of the top of the outer turning shaft. To do that, I needed to attach a gear around the outer shaft while supporting the inner shaft on the frame. This is not interesting looking and isn’t all that well made but it should work for a few days before it breaks