Microsoft has this "feature" that has been around for a while in Internet Explorer that is now part of Windows 8. It is called SmartScreen. 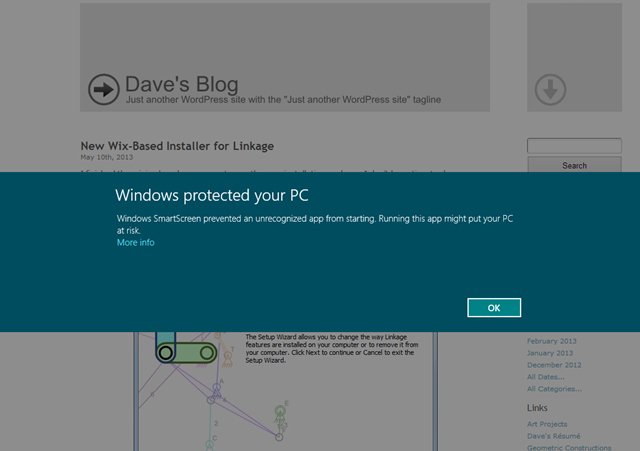 The idea is to tell people that they are downloading something… something that has not been downloaded a lot. That’s it. It is a feature that tells a user that they are at risk only by counting how many times someone has download, and not complained about, this piece of software. At least that is what I can find about how the feature works.

Apparently, the $99.99 I just spent to get a code signing certificate means nothing. It does mean that users won’t get pestered twice about my software but signing doesn’t let them see that I am official and doesn’t stop them from getting warned that I am some sort of evil virus maker (see above picture).

So what is the point of the stupid friggin’ code signing certificate? Is there no certificate that I can get to get rid of this horrible message?

I would not mind quite as much if the fact that the installer and program are digitally signed would show up with this message to at least help put the user at ease. But this message, that my program puts their PC at risk, is totally misleading. There is no risk.

I think that people will get computer viruses much less often now that every single uncommon thing that they download gets discarded, the good with the bad.

Thanks Microsoft. Now even less people will use my very cool and free software. I wish that I could get my money back for that code signing certificate.