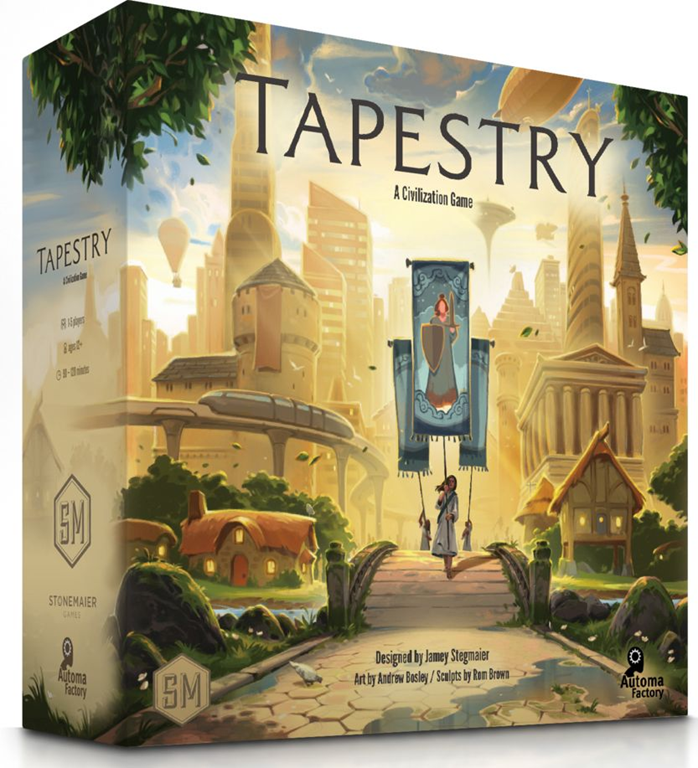 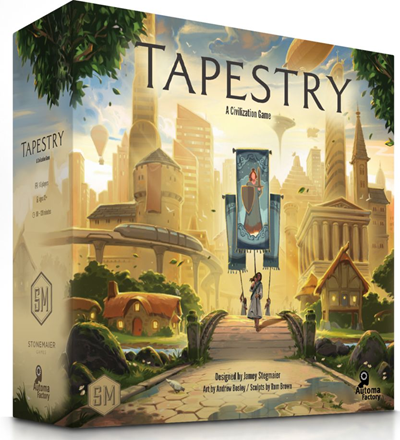 Tapestry: noun. used in reference to an intricate or complex combination of things or sequence of events.

“Workers” on the Science Track

Tapestry in sort of a worker placement game; Each player has four workers and each worker progresses along a track of Science, Technology, Military, and Exploration, and deciding which worker to move is based almost solely on the destination space along each track. The placement of a worker is not as arbitrary as in Agricola but there is still the choice of which of four potential spaces should be used on any given turn. This worker movement, which costs resources to do, constitutes a small but significant part of the gameplay; In addition to moving their “worker” pieces, they also manage moving buildings from a resource management board (their player mat) to their capital city. 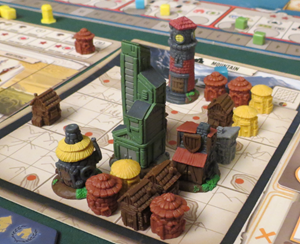 The capital city building placement is the mechanic of the game that starts to show that this is a collection of board game mechanics and not just a one-trick-pony board game. Whenever a player collects an income building, they typically place it in an open space on their capital city mat. The capital city mat, which is a 9-by-9 square map has some geographic features that differ in placement for each player but are generally the same, with there being some spaces already taken by a red dot to indicate an unbuildable area. If all non-red-dot spaces in a given quadrant become filled with buildings, the player immediately gains an extra resource. Rows and columns that have red dots and buildings in every space can score points. One of the more interesting features of the game is that large multi-space buildings (landmarks) can be obtained from the main board, by landing on various spaces, and those buildings can be placed on the capital city map to cover larger area. Gaining the right shaped building at the right time can fill all of a quadrant and gain the player a resource they might desperately need. Filling the city optimally to take advantage of the landmark buildings is a bit of a mini-game where the only competition with other players is to get the landmarks first. 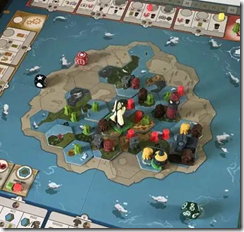 It seems that at this point, the game is quite interesting with various tracks of progression and a capital city map filling game. And yet there is still more to do; Players are also exploring and conquering spaces on a central hex-based map. The Exploration track, mentioned earlier, has spaces that allow a player to explore by placing hex shaped tiles on the central hex map. Exploring in this manner is a way to gain resources and separate from gaining resources during an income turn, or when filling areas in the capital city, since each hex tile has some sort of benefit shown on it. The military conquer action available on the Military track lets a player place a new tower marker on a territory they already control or on an empty territory adjacent to one that they already control; The military conquer, like many other actions, can yield resources, in this case by the roll of dice. A player can even place a tower on a territory where an opponent has a single tower and mark their control of this by toppling, on it’s side, the tower of the other player. There are bonuses available for conquering two opponent towers and for controlling the center of the map. There are also ways to gain points for controlled territories.

At this point, I’ve mentioned the four main tracks of progress, the player capital city map, and the central exploration map shared by all players. The game seems quite full but there is still more to discuss. There is a Science track and a Technology track that are just as important as the Exploration and Military tracks described above.

The Science track is interesting because there is a die that the player rolls when their worker gets to certain spaces on the track. The science die has icons that show the player a track to advance on, be it the Science track again, or one of the others. The fourth and final track, the Technology track, might be the most power track of all of the four of them; The Technology track lets players collect technology cards that can be upgraded at various times in the game to gain a benefit. As with most things in the game a player can obtain, points can be scored for technology cards. These cards are powerful because while one technology card might give a player a resource, another might allow the player to place a building in their capital city or even gain a landmark building to place. The game has a lot going on and this adds quite a lot of possible complexity to the game. But none of the rules so far are complicated: Move up a track one space at a time and do whatever actions the space allows. Then whenever a building is gained by movement or other means, place it in the capital city. The challenge of the game is more in the decision making than in the actual number of possible actions to take.

And now to the part of the game where the name “Tapestry” is more directly applied: Tapestry cards. The Tapestry cards are cards collected by landing on certain spaces on the tracks on the board (and from a few other places like exploration tiles and technology cards). They are different from technology cards with many of them giving a continuous benefit to the player. Even when the benefit is not continuous, there are still benefits that are stronger than on most technology cards. And when the benefit is continuous, it will last for an entire round, called an era, and will only be replaced when the next era starts. As for the era’s in the game, each player decides for themselves when to change from one era to the next. There are benefits from delaying the era change as long as possible but also benefits to changing a bit early compared to the other players. Again, it is the variety and meaning of the choices in the game that give it complexity, not the rules for how and when to act.

There is a bit more to the game than I mentioned here but the rest is just detail frosting and a board game cake. This is an interesting game that, for some of us, has not run out of challenges and opportunities to play better. I still have many civilizations, tapestry cards, and technology cards, that I have never used in a game. I look forward to playing again so I can figure pout just what is keeping from the elusive high scores that some people get. Maybe they do get the lucky tech card that fits perfectly with their tapestry card that takes complete advantage of their civilization. That’s a possibility but I’m not concerned about it. I look forward to the day when I can combine my good moves into one large epic game of Tapestry. 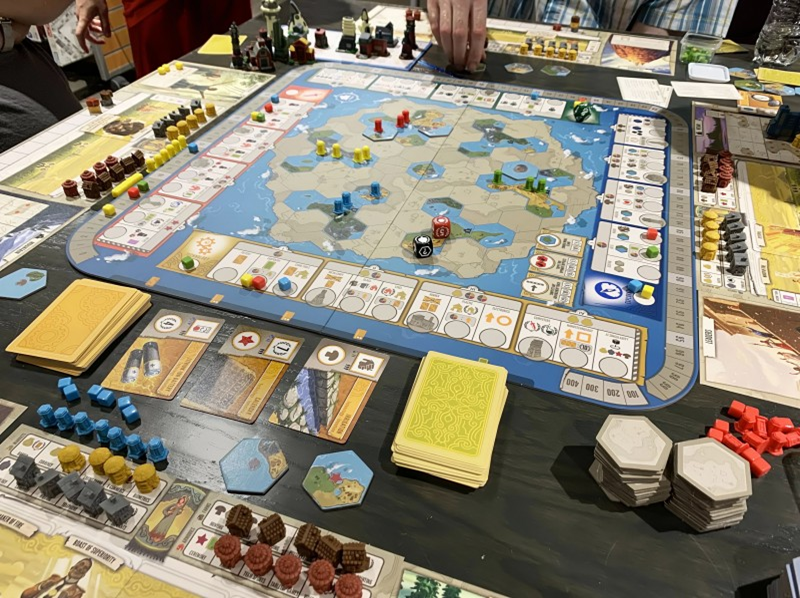 A Game of Tapestry