I recently added a new feature to the Linkage program. The new feature allows an input to be manually controlled during an animated simulation. There are currently four types of simulations:

This animation shows a simplistic reversing mechanism like those found on a steam locomotive. The mouse is used to change the position of the one manual element in the mechanism. 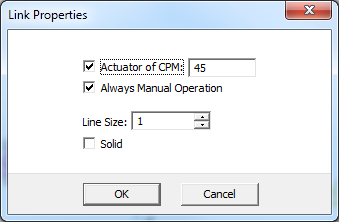 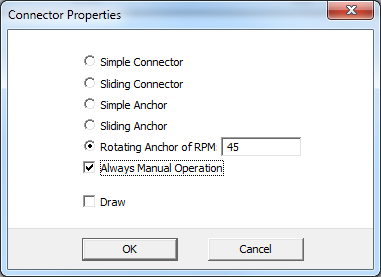 I have also changed the way the actuators are drawn when they are solid. The entire actuator had been solid and would appear to stretch when it moved. The two lines of the non-solid actuator were still visible. Now I make the moving line thicker and only enclose the “cylinder” part of the actuator in a solid border. A picture is worth a thousand words:

Wireframe, line, plain, or whatever it is called to be not-solid.

My next feature will probably be the addition of cams. I have two ideas on how to handle these. One idea is to use the hull, or outer shape, of a link as a cam. I would need to display Bezier curves for the shape of a polygon link instead of the flat shape drawn now. That should be automatic but I am then not sure how to simulate the movement.

Another idea for the cams is to have a cam shape that is separate from the shape defined by the connectors of a link. This would work the same as the previous idea except that adding points to the cam for controlling the shape would be a new unique feature. Dragging them around would be the same as for connectors or for the throw handle/knob on the actuators. A link could then have a cam and an outer hull that are separate and connectors could extend outside of the cam shape for connecting things. This is better but harder to implement because of the need for adding/deleting/moving the points that define the cam shape.

More info about the Linkage program can be found here.