My Creativity Knows No Bounds

Because my creativity seldom ventures far from home.

Planetary Defense is a fun game. Not so much on a tablet because tapping the screen actually makes it hard to see what’s going on when a big finger obscures the tiny incoming bombs. But it’s sort of fun and is certainly an achievement for me.

Right now, I am stuck. I want to write another game but I can’t come up with any ideas that are original. Lunar Lander would be fun and a lunar lander game was one of the first programs that I wrote. It’s just not unique or original in any way and unique and original is something that I am desperate to achieve. I feel stifled by my own lack of creativity. 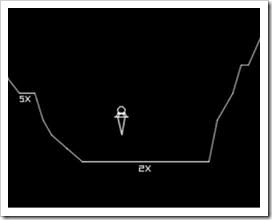 I spent quite a few dollars playing the Atari Lunar Lander game in the 80’s. This makes it an appealing idea for a JavaScript game but I think that it has been done so many times that it would not get much play (not that anyone plays any games of mine).

I was thinking of some sort of hybrid where a spacecraft is piloted through space and different planets and moons, and maybe small rocks, could be picked for landing. The idea would be to land and get fuel to get to the next place in space. Rescues and orbital docking maneuvers would be a cool addition to the game but I’m not sure that it would be different or interesting enough to play.

So I’m stuck trying to come up with a game idea and I seem to have no creativity right now.