It was an easy fix once I read a few forum posts that were slightly related. Paths to an old Windows NT 4.0 DDK were specified before the standard library paths and it caused the wrong libs to get linked in for 64 bit builds. I don’t really need the DDK paths because I don’t build the programs that need them with VS 2010.

I’m working on my train simulator program. It’s something I started years ago as an idea and got as far as being able to design the track locations. I really don’t like the current train track designers in most games and simulators because I don’t think that real railroad surveyors use cubic splines to plan where track will go. I have a very old book, maybe 50 years old, that shows track being designed using straight lines and then parts of circles. Spirals to ease into curves are handled but they would be spirals and not splines of any sort.

The reason I was writing my own “game” was to allow a person playing the game, not a simulator, to survey the track location for almost free before laying any of it. I want a railroading game where track must be laid in rational and physically realistic ways. The most recent railroad tycoon, which is very old at the moment, allowed trains to go up and down outrageous hills. it also seemed to have more of a penalty for curves then it did for hills. In the real world, trains go quite a long ways out of the way to avoid steep grades.

My ultimate goal was to have a train game that had the following features that are not present in other railroading games:

There are a lot more ideas. It would be more like a railroad surveying and operating simulator in the form of a game. It’s a game because one the trains are all routed and have timetables, they would go about their business themselves. The game would run in real-time in many ways. For instance, the player could opt to watch an old steam train travel 100 miles and it might take 4 hours to finish the route. Of course it could be sped up and would have to be. I’d still have some form of interpolation so that one day of train business somehow represented a week or month of business. I’d hate to have the thing running at real-time speeds and then need to wait a month to get an end-of-month financial statement. That part would need a bit of work to get the right balance of realism and game-play-ism.

The finished product would have A.I. competitors from the very beginning and they wold already have routes running when the non-computer-player starts. Those routes might be mule routes. A game might also start with no industry worthy of a road or rail and once the industry shows up at teh very beginning moments of play, the player can start building as quickly as the computer players. In some cases, there is no need for A.I. because it would be hard to be profitable even without competition.

Here is what I have so far. It’s not even a good experiment yet: 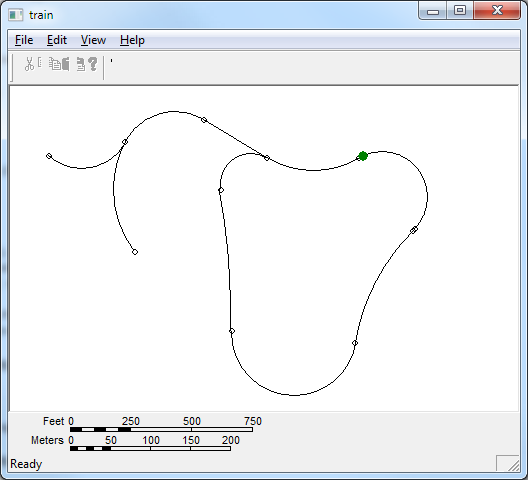 The ideas for a game/simulator are extensive and it would be fun to build it if not for the thousands of hours it would take to make it actually playable. Any volunteers with funding?