Automation Empire is a computer game where you create a production system to drill or mine resources and then sell them or refine and combine them into more profitable materials. I’ve spent about 8 hours, an hour or two at a time over the last week playing this game. These are my first impressions and I’ll start with the bad things. 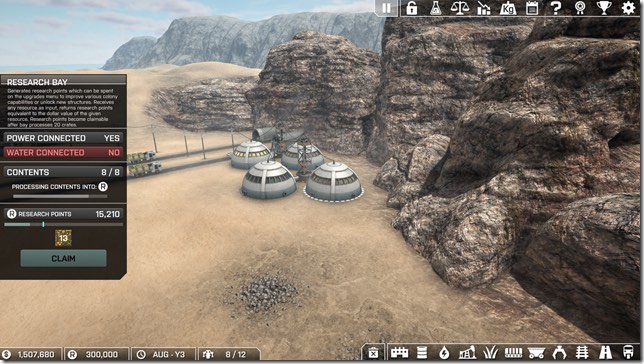 Research Stations with Manual Stuff To Do?

The things that seem wrong in the game start with the lack of useful control over the scroll speed. Waiting to pan to an area while holding one of the WASD keys is just an annoyance but one that would have been easy to fix. On the other hand, there is a setting for camera friction which doesn’t seem to mean anything to me. There is also no way to see enough of the map to even know which way to pan if none of your machinery is in view. This would be harder to fix but why not let the camera just zoom out more? Well, zooming out would allow more content to come into view so lower-polygon-count models for the machinery would be needed to keep the graphics running smoothly.  Another things that bugs me is that the game doesn’t remember what tool I had selected in each toolbar. If I build a conveyor then switch to building a crating machine before switching back tot he conveyor tools, I have to select the conveyor again. Remembering this would have zero penalty and would often save me a mouse click. Those clicks add up and I get tired of dealing with them. And finally, a pet peeve of mine is when a game has automation like this and then forces me to do something manually; Having to do select a research station and then click on the “Claim” button to actually collect the research points is stupid at best. I don’t have to do anything manually to run the game or the machinery anywhere else (so far) but for this, I have to go look for the research station, select it, then click that button. Again, this is a terrible design and a stupid feature.  I can get a bot to pick up crates and load trucks so why can’t the bots do it? The mine cars reverse at the end of the track automatically so maybe they could do it. WTF do I have to do it? This is one of two things in the game that might make me dislike it enough to stop playing. The other thing, you ask? Well, unlike in any real life situation, I have to do more than spend money or research points to get new technology. There is a gating feature where I can’t get newer tech if I have not shipped enough product in a three-month period. At least I think it’s three months since there seems to be no documentation for the game symbols. This means I totally qualify for something and I just have to keep building things that I don’t want or need in order to qualify. This is a purely contrived mechanic of the game and I’ve hated gating features like this in every game I play. Cities: Skylines won’t let me build a one-way road until I have a few hundred residents. WTF is with that? What does the population count have to with a road having a one-way sign on it or not?

That’s about it for bad things. None of those make me want to abandon the game just yet. But those contrivances to force me to wait to get upgrade and do stuff manually every now and then are just plain annoying. 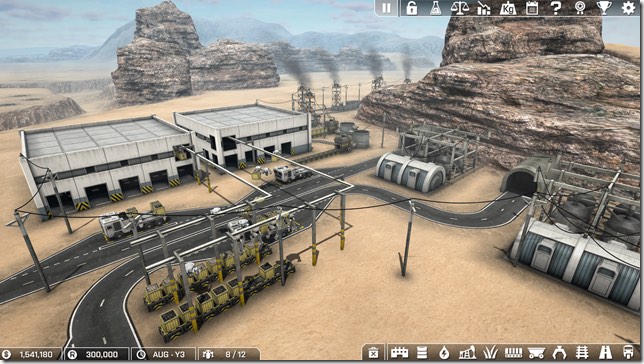 Mine Trains, Factories, Claw Trains, Bots. And This Is Just The Beginning

Now for the good stuff; The game is extremely attractive. The scenery in the desert map and the rough look of the machinery go very well together and watching the little mine cars pick up and deliver their material is just fun for me. The movement from mines, which were implemented in a clever way to make the game work well, to the holding bins and then to the crating machines is what I might expect in a game like this. I’m not sure if I’m disappointed that there are not more tubes for moving materials that way but it sort of makes sense that you can’t move ore through tubes for more than a very short distance. The only conveyor belt you get to place outdoors, as far as I can tell, are the unloading stations. The hook railway thingies can pick up crates from those belts and drop them off on other belts so one a few upgrades are made, things get interesting. The idea of building a factory building and placing factory components indoors is great. I think that almost everything can be placed in a building, except maybe roads, is very cool. The components I’ve used so far to move materials in mine cars, crate them, refine them, and load them on trucks, all works rather well. And kudos for not making me manage a little due running around building things like in Factorio. Micro-management always seems to detract from creativity in these games for me. If there were a sandbox mode with all upgrades available that’s what I would play.

I have not gotten far with this game and I expect to burn out on the repetition in a short amount of time. But the look and feel of the game makes me want to keep playing for now. 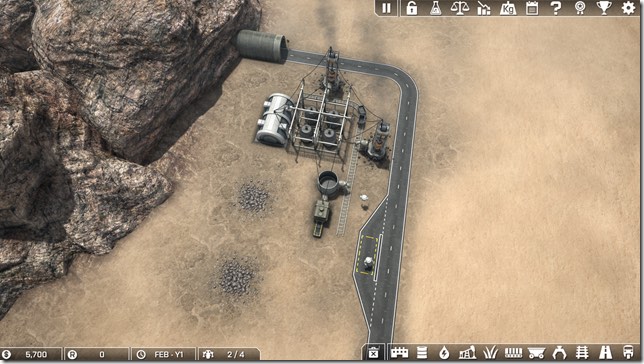 Above is a picture of my first colony. This game uses the space colony idea like Factorio as a way to explain the limits of the scenarios. Like where is the rest of the civilization? There is no other civilization here because you are on some strange far away planet, or some such thing, and all you have is some starting money, the ability to buy things, and the ability to build them. The picture shows a few mines (the vertical machines that drill and bring up resources), a power station, a droid/bot control building, a mine train track with a short train, a storage container, a crating machine, a conveyor to allow bots to get crates and load track, and a road for the track (with a stopping area). Here is another view of that same area. A truck is driving up over on the right. 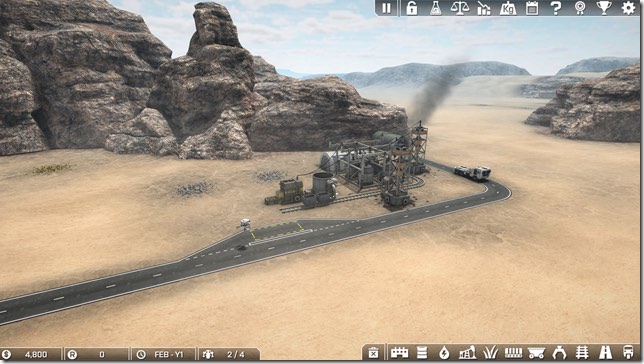 Below is a picture of the same area with a few more pullouts for the trucks and a second set of mines/drills. I don’t know what happens if the mine cars are unloaded into the same storage bin when they contain iron ore and coal ore. I just keep things separate because you know, without some good documentation, the game might allow mixed ore or it might crash and delete my hard-drive. 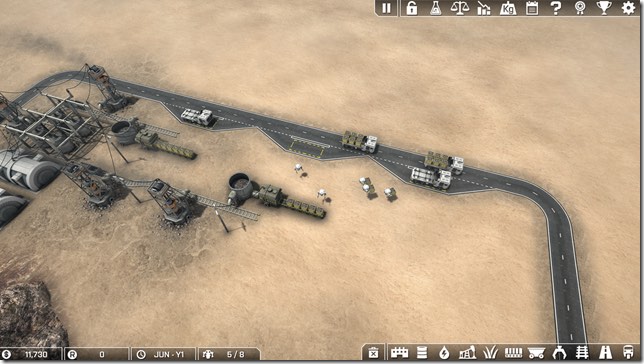 After playing for quite a while, I was able to unlock the refining equipment that turns things like coal ore and icon ore into coal and iron. I also got to the point of researching and building claw trains, the overhead monorail system for moving crates more quickly and over top of other equipment. Those come in handy for quickly moving crates from a factory outside to a loading (or is it called an unloading) station. I dislike the bots because of their free movement that cant be programmed. They can’t even be assigned an area to stay in so they might all end up very far way from your conveyor when crates start showing up on it, making the game a bit unpredictable. There is a claw train station for loading trucks but like other upgrades, it requires research and just moving a lot of material off the map for a while before it’s available, I can’t wait to get rid of the bots. Here’s a picture of an indoor factor selected so you can see inside. Crates of raw material are being refined and then moved outside to conveyor belts so the bots can load the truck. The game is really like a city building game and I’m just building things for fun like a toy, not a game. 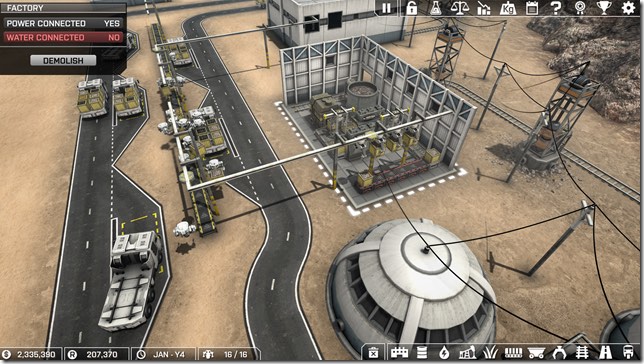 I would recommend this for anyone whole likes the concept and for anyone who played Factorio and liked it. Even if you don’t get very far, you will have a pretty good time building things and watching them run. Just be prepared for a few clumsy issue in the game.