It is interesting how the world has changed. For decades, the symbol that tells you to wait has been an hourglass. Sometimes a crazy person would use some sort of pocket watch symbol. Now, all of the sudden, a swirling thingy is it. It’s the thing to use when background processing is being done. 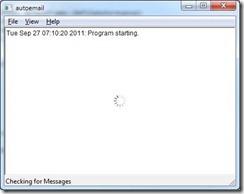 I have added a swirling thingy to my auto emailer program. It was surprisingly simple.

That was all that was needed. It was just a few lines of code in a few places.

I don’t have a picture but another fun thing I tried was making the status bar show up under the menu instead of at the bottom of the window. This would have been fine except for the text in in not lining up with text within the window itself and the little resize icon in the right corner still being shown. I gave up on the status-bar-at-top idea and went for the animation idea because it was just more cool looking.

So the animation always shows up on a white square background. That’s not such a big deal. No one will see this anyhow.