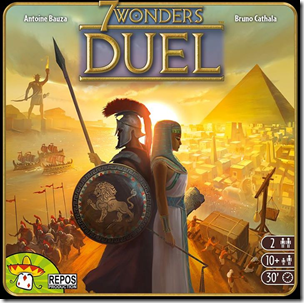 My daughter and I have played 7 Wonders Duel twice. That’s enough to give a basic review of the game. It is certainly not enough to describe a good strategy.

7 Wonders Duel is a two player version of the 7 Wonders game. This game seems to have been invented for one reason: 7 Wonders is not really a good game for two people.

In 7 Wonders Duel, two players take turns taking cards from a central stash and using those cards for a small variety of actions. The most common action seems to be “paying” resources to “build” the card in the “city”. “Paying” is in quotes because a player need not give away resources to “pay.” The player just need to have access to the required resources to build. And “build” is in quote because the player just places the card face up in front of them wherever they way to “build” the card. And finally, the “city” is just the collection of cards in front of the player.

Resources and Other Cards

Another action the player can take is to take a card and then place it in a discard pile. This is done to get money, 2 coins per card plus some extra based on other factors, and also to keep the other player from getting that card.

One of the Eight Wonders

And finally, each player has 4 Wonders and a Wonder can be built if the player has the required resources, by taking a card and placing it face down under their Wonder as a marker that the Wonder has been built. Wonders, and many of the cards, have effects that happen immediately, and/or at the end of the game, plus provide resources for “buying” cards during the game. Of course, once someone builds the seventh wonder of the game, no more can be built!

I’ll skip the gameplay and get right to my thoughts on the game. To see how the game is played in detail, find a good YouTube video.

We enjoyed the game. It is easy to learn for anyone who plays board games now and then. For someone who only plays Sorry, Parcheesi, or games with almost no rules, it might take one or two games to really get it. We play Agricola so all other game rules are easy to us (Agricola having some of the worst written rules I’ve ever seen).

The box is small and the setup is simple. I recommend this game, at least as a game to try if you only have two players.