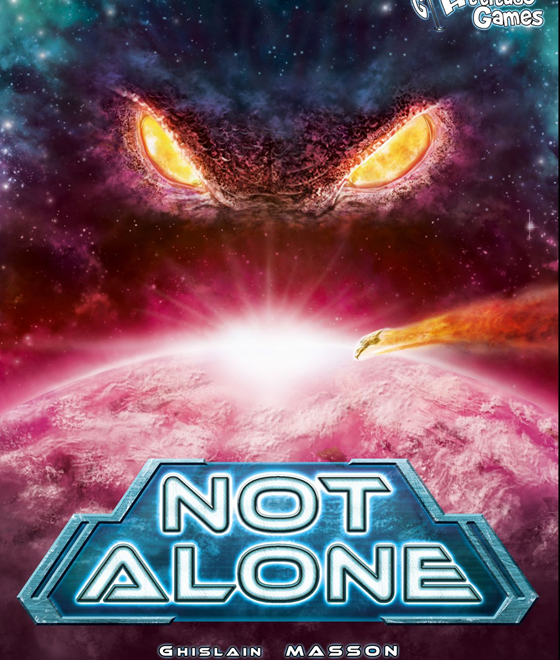 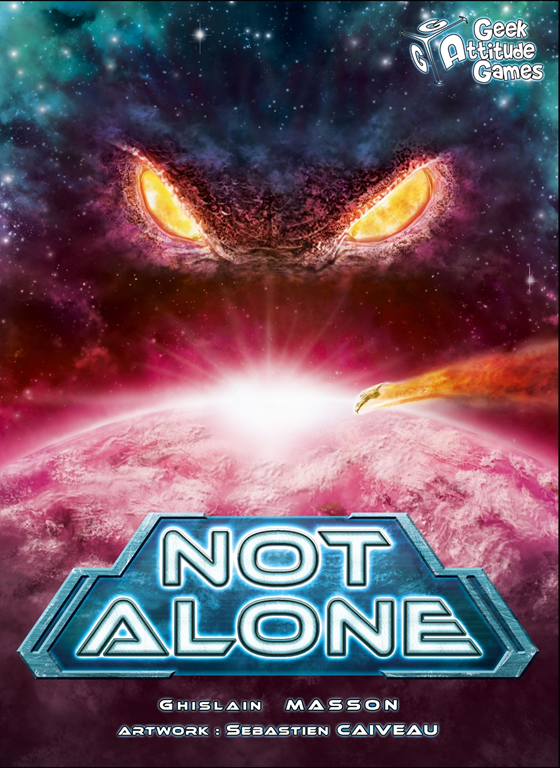 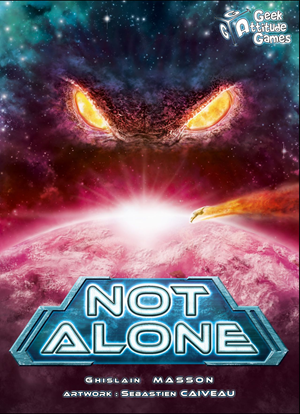 Not Alone is a card game where one player plays a monster/alien and the other players try to “hide” from it until they are rescued. Although the players can all cooperate, that seemed to happen very little. The game does not allow secret communications, or at least our group didn’t allow it. The only necessary cooperation is when one player plays a card that let’s them give another player more “will” so the entire hunted group doesn’t lose ground to the hunter.

The game seemed skewed towards the hunter winning. The hunted only won about 25% or maybe 30% of the time. I suspect that if we figured out how to cooperate better as the hunted, it would go the other way. In fact, I played the last of 6 or 7 games as the hunter and wow did the hunted figure out a few tricks I didn’t see earlier.

It was a fun game. I ordered a copy. Preston, the guy who brought it, was visiting our beautiful lake and is now heading back to his home a few states away. So we need a copy. Since the game supports a lot of players and plays under 30 minutes, it’s a must-have. We already play a lot of games that last 2 to 4 hours so shorter games are in demand. 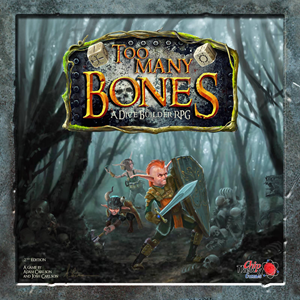 Too Many Bones is a role-playing adventure/battle game. Each player plays a different character and builds up that character’s skills in their own personal way. With a few expansion/add-on characters, our group has 6 to chose from. In Sunday’s game, I played Ghillie. Ghillie is a ranged characters, which means ghillie is like an archer. Tim played Boomer, another ranged character who throws bombs. Wil played Picket, an interesting melee character (not ranged) who can build up defense shields then use them for a shield-bash attack. It’s quite over powered if played right, and with the right loot (card with extra ability on it). Preston played Nugget. Nugget is a sort of treasure-hunter character that can play as ranged and/or melee. To make a ranged attack, Nugget just needs the skills to use a long sword or to have collected some sling stones.

The game started out quick. We skipped all of the fanfare of the first few days of the adventure and ended up in a tough battle fairly soon after starting. It was tough because we didn’t take extra health and training that noobs usually take. We went for “normal” mode. But although it felt tough and one of our characters was knocked out in battle, we did fine. As long as one of us survives the battle, we all get the win!

I find the Ghillie character interesting because there is the option to gain “pets” to use in battle. The three different pets have slightly different abilities and I picked up the wolverine fairly early in the game. I was desperate to make good use of the pet since the first few games where I played Ghillie, the pets were mostly distractions that were more like bait then anything else. in tis game, the wolverine actually survived to take a turn (pets get placed on my turn then get their turn just before my next turn) and got to attack an enemy. By the time the last battle took place, I had both the wolverine and the lion. Both were very useful acting as bait and attacking enemies a little bit before they were knocked out. there’s no way to say that we would not have won if not for the pets, since I would have had some other skill instead of them if I had not played them. But without them and without some other good skill to replace them, it might have been toucher to win.

Ghillie also has some archer skills that came in handy. One skill is to direct some of my attack at two targets, thus doing extra damage. Is there a down-side to Ghille? Yep: Ghillie has an innate ability to scout. This lets Ghillie look at one of the face-down bad guys that will be in the next battle and then move it to the bottom of it’s stack if we want to avoid it. It’s a great ability but when Ghillie upgrades that ability to scout for two baddies, it’s not so useful. And the whole scouting thing is still not as useful as it sounds like. There’s no way to know that skipping one bad guy just brings a worse one to the top of the stack! Compared to some other characters’ innate skills, it’s a little weak.

Tim played Boomer, a character I have never played. Boomer can collect bomb parts and then use bombs against the opponents. Abilities and skills like that are very useful since there are some opponents who can “break” the “swords” of our characters. The baddie “break” skill only takes away the attack capabilities of regular attacks and not the ability to attack with alternate skills like bomb throwing, poison, and other things like that. It makes a lot of sense when you realize that the bad guy characters that have the “break” skill are all made of rock!

Wil played Picket and was the one who made the final attack on the tyrant in the end battle. That’s because Picket builds up defense shields then collects bones to do a shield bash. Ah, bones, the thing the game is named after. Lots of dice in the game, and there are lots of dice, have bones on one or more sides. Whenever a die comes up with bones on top, that die can be set aside as part of a backup-plan. The more bones, the better the backup-plan. Picket can collect just a few bones and then use defense shields for an attack. Since Wil had collected a loot card that let him save shield dice without taking away from his ability to roll more of them (usually, when you save a shield, you don’t get to roll another on another turn), he ended up with 8 total at one point. he also happened to have another loot card that let him increase the value on those defense shield dice by 1. That means a single shield gets converted to 2! By the time he did his shield bash attack on the tyrant, he had a total shield bash attach strength of at least 12. That took out the tyrant shield, got past his thick skin, and still did the 9 damage to defeat him!

Preston was playing Nugget, a fairly new character that was an add-on (as was Ghillie). Nugget has that ability to attack directly as a melee unit, or attack at range like an archer. Preston was able to gain a skill that let him drop a “shiny gem” on a spot near an opponent, thus making the opponent move to that gem instead of moving to attack one of us. When it was played, it was very effective since it, Ghillie’s pets, and some other useful move, all kept us high on health throughout the final battle. it was interesting how the first few battles had one or more of us knocked out of the battle but in the final encounter with the tyrant, we all stayed high on health and and made quick work of it. Heck, it was probably only a four hour game!

Look up Too Many Bones. It’s a fascinating game.